Display Of Might: Pizza Hut Is Having All Its Employees March In Formation To Show The World Their Discipline And Power 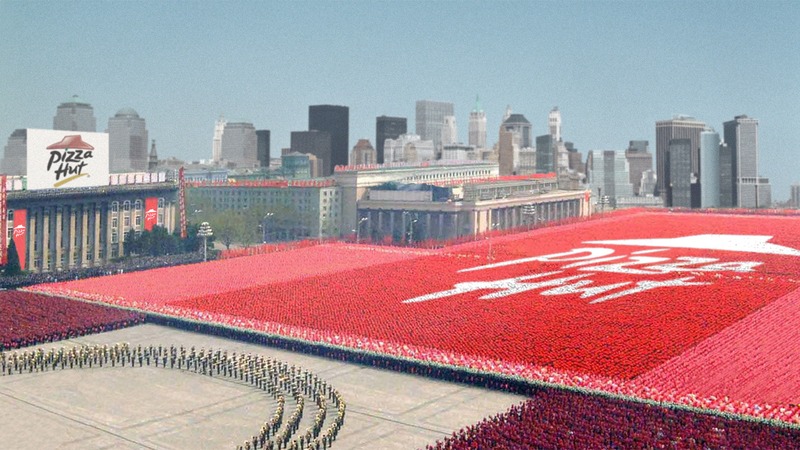 Pizza Hut is the biggest pizza chain in the world and its latest move will make sure you don’t soon forget it. The fast food chain is having all 160,000 of its employees march in lockstep formation in order to demonstrate their discipline and power for all the world.

There’s no doubt about it. Pizza Hut is flexing its muscle. And the result is deeply troubling.

The march began down a wide boulevard near the company’s headquarters in Plano, Texas, and has since traveled several miles into the city’s downtown area. Leading the procession are about 5,000 cashiers waving ceremonial flags featuring the giant emblem of Pizza Hut—that austere domed top, commanding power with each defiant line. Following them are tens of thousands of other Pizza Hut employees, marching side by side, each bedecked in the traditional red and black uniform of Pizza Hut. Seen from above, it has the terrifying effect of watching a lava flow make its way down the side of a mountain, overtaking everything in its path.

With this exuberant display of pomp and circumstance, it’s obvious that Pizza Hut is sending a message to the rest of the world, and that message is loud and clear: Pizza Hut is stronger and more united than ever.

Pizza Hut’s procession continues for at least a mile, and just when you think it must end, there is a strange, hypnotic movement on the horizon. Soon, it becomes clear: These are the pizza deliverymen. With each step, all 10,000 or so deliverymen extend a Pizza Hut pizza box to an invisible customer. They do this synchronously and with a precision that can only be described as bone-chilling.

Flanking the deliverymen is a fleet of pizza delivery vehicles, heralding Pizza Hut’s dominion over long distances. But perhaps the most striking moment occurs when the Pizza Hut deliverymen round a corner and unanimously turn on a dime, without a single employee breaking formation. Watching the ornate display of uniformity, one can only wonder what else they might be capable of.

Wow. With this massive march, Pizza Hut has demonstrated the rigorous discipline and massive numbers of its employees for all the world to see. The march has so far been peaceful, but it’s obvious that the ubiquitous restaurant wants the entire world to read between the lines: The iron will of Pizza Hut shall be obeyed, and god help anyone or anything that would stand in its way.