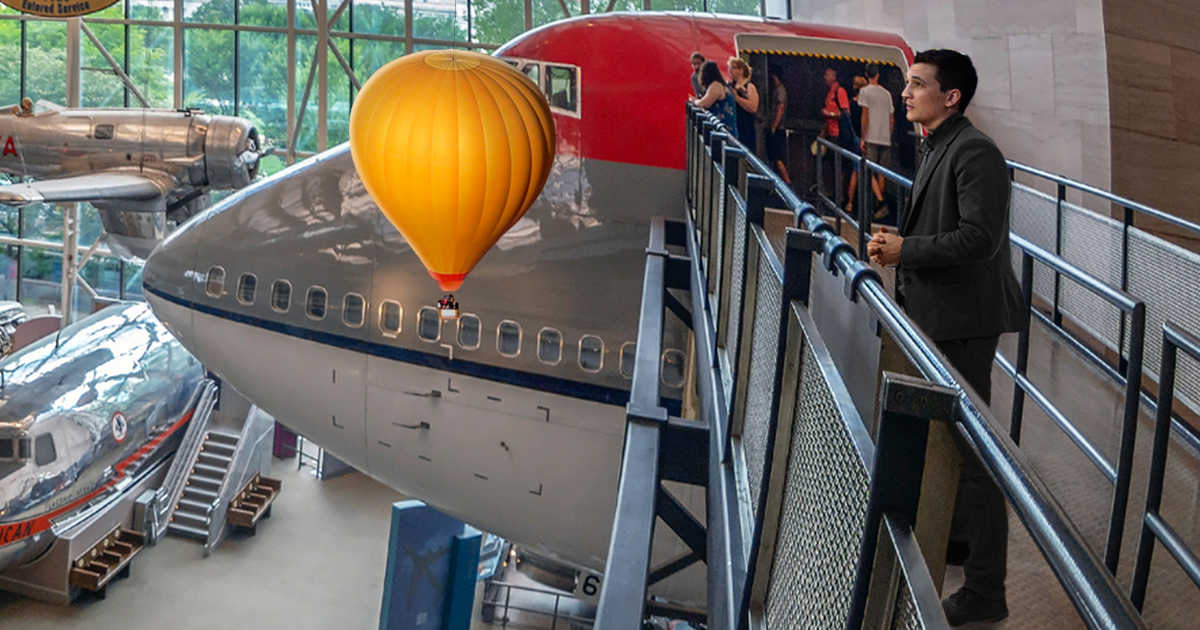 Oof. If you thought you were having a rough day, just be thankful you aren’t Miles Teller’s publicist, because they’re currently stuck dealing with a PR nightmare from Hell: Miles Teller just had to solemnly tour the Smithsonian Air & Space Museum after making fun of hot air balloons.

Yikes. This is a good first step to atone for his comments, but he’s still got a long way to go before he bounces back from this one.

The unfortunate saga began earlier this week, when Miles Teller tweeted out a series of insensitive jokes about hot air balloons:

“@miles_teller: Whoever invented hot air balloons was like ‘let’s make a blimp but worse.’ Can’t think of a dumber way to fly.”

“@miles_teller: There aren’t even chairs to sit on in a hot air balloon. You literally have to stand in a basket for hours on end. A basket with a max speed of 2mph. So fucking stupid lmao”

“@miles_teller: Like, surely these guys have heard of planes. Not sure how you can see a plane and be like, ‘Nah, I’d rather fly in a slow-moving dipshit balloon that’s LITERALLY CONTROLLED BY FIRE and could be taken down by a fucking slingshot.’ smdh…”

The comments were swiftly met with backlash, and while Teller deleted the tweets shortly after posting them, the damage had already been done, as thousands of users had taken screenshots of the posts and spread them widely across the Internet. From there, it wasn’t long before Teller was forced to tweet out a mea culpa acknowledging the harm that his ignorant comments towards hot air balloons had caused. He also revealed in his apology that he’d been contacted by the Smithsonian Air & Space Museum, who explained why his remarks were so hurtful and offered him a private tour of their hot air balloon exhibit to educate him on the aircrafts he’d so recklessly used his platform to disparage, which Teller accepted.

Then, just a day later, the Whiplash actor was photographed dressed in all black at the Smithsonian Air & Space Museum, nodding his head in deep personal reflection as he listened to a tour guide describe the rich history of hot air balloons and their significant role in the development of air travel. As the tour ended, he took the tour guide’s hand in his hand and deeply thanked them for enlightening him on this fascinating type of aircraft, pledging to use his influence to advocate for hot air balloons moving forward. Teller went on to release a statement that same afternoon announcing he’d be donating $50,000 across various organizations that promote hot air balloon research and awareness.

Wow. Teller’s P.R. reps deserve a major raise after scrambling to put out this fire!

Only time will tell whether this apology tour will make up for his ignorant hot air balloon remarks, but there’s no denying that Teller is handling this scandal as thoughtfully and respectfully as he can. Next time, you’d better think a little more before you tweet, Miles!