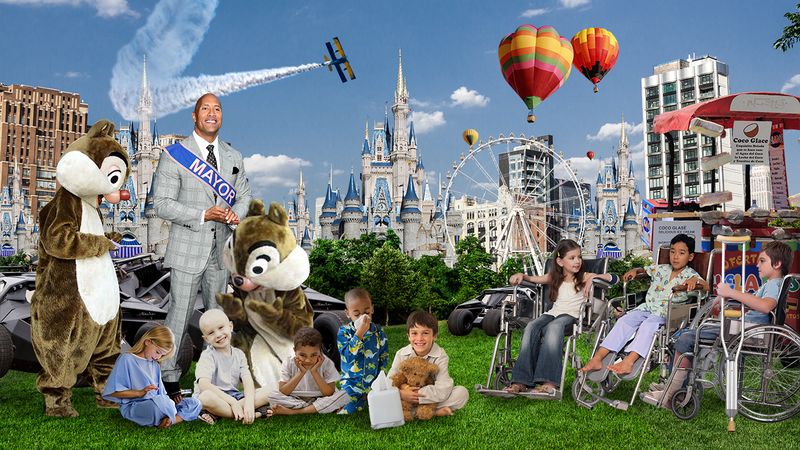 Get ready to happy cry, because what the Make-A-Wish Foundation did for some sick children is absolutely incredible.

The dream-fulfilling nonprofit has just finished construction on a brand-new city where every terminally ill child in the country will get to live out the remainder of their lives. Make-A-Wish City currently has a population of over 14,000 kids diagnosed with incurable diseases, and more are arriving every single day! The metropolis is designed to make each moment an unforgettable, once-in-a-lifetime experience.

Featuring perfect replicas of every major league ballpark, 15 Cinderella’s castles, and a fleet of 800 Batmobiles, there’s no shortage of places to visit or things to do in the sprawling Make-A-Wish City! Every morning, the children are paid a wake-up call by the full cast of The Avengers, who visit each child in their hospital room to let them hold Thor’s hammer and beat the Hulk at arm wrestling. Then, a medical team consisting entirely of Chip and Dale impersonators come in to provide their daily medications and replace their IV tubing. And it’s hard to be scared of MRI machines when they’re all shaped like Shrek’s head and you get to climb into his mouth!

Kids who now live in the city say that moving here was a complete surprise.

“I fell asleep in my hospital room, and when I woke up, I was in a car sitting next to Jeff Gordon,” said Kimberly Schuler, an 8-year-old cancer patient and new resident of Make-A-Wish City. “He was driving really fast and told me I was going to my new home.”

According to Make-A-Wish City mayor Dwayne “The Rock” Johnson, bringing all the nation’s sick children together is more than just a goodwill gesture—it just makes logistical sense.

“Instead of celebrities spending half their days traveling between different hospitals in different cities, now we can spend 100 percent of our time fulfilling wishes,” said Johnson shortly before a live performance in which he leapt out of the window of his third-floor City Hall office, zip-lined across the street, and drop-kicked Maleficent into a public fountain. “It’s the least we could do for these children in need.”

Although it’s sad that these kids are sick, it’s heartwarming that they can spend their final weeks in their own, totally kick-ass municipality. Faith in humanity restored!