Education FTW: ‘Sesame Street’ Showed Grover Laying An Egg That Elmo And Ernie Both Hatch Out Of To Teach Children Not Everything Can Be Explained With A Catchy Little Song 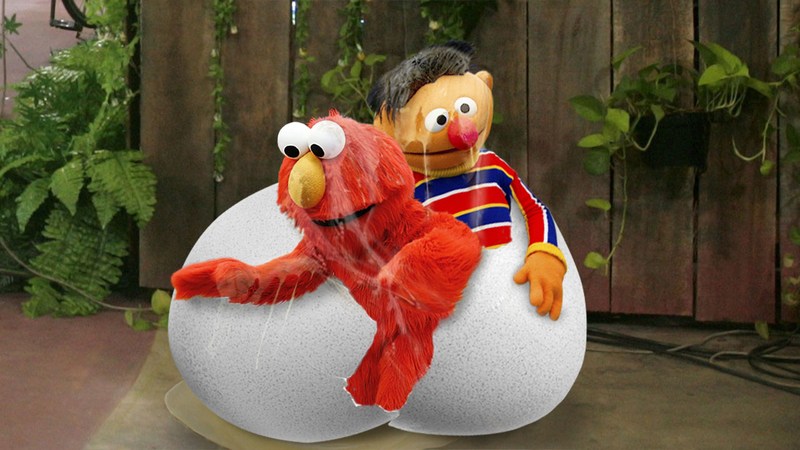 It’s been almost 40 years since Sesame Street first entered our homes and our hearts, but even after all this time, it’s still finding new and powerful ways to enchant and educate kids all over the world. Yesterday, the show proved once again that it remains one of the most innovative and powerful voices in children’s television: Sesame Street just aired an episode where Grover lays an egg that Elmo and Ernie both hatch out of in order to teach children that not everything in the universe can be explained with a catchy little song.

This is an amazing moment for educational television!

The amazing moment occurs during a big song about understanding different types of feelings, featuring many of the iconic and beloved Muppet characters from the show, such as Big Bird, Cookie Monster, and the Count. In the middle of the song, the music abruptly goes silent, and Grover screams, “My guts are on fire! It’s time for me to squirt out my shameful mystery! Look children! Behold the impossible!” and begins grunting and moaning as he slowly passes a gigantic white egg out of his anus. The rest of the Sesame Street characters look at Grover with mild interest as he struggles to push the egg out of his body.

Once Grover finally lays the egg, lucky Sesame Street viewers get to watch as the shell slowly cracks open and the beloved characters Ernie and Elmo claw their way out of the egg. Both are gasping for air and covered in amniotic fluid, and as they lay trembling on the ground, Grover looks at them and says, “My daughters have arrived, and I hate them.”

None of the Sesame Street characters try to offer any justification, musical or otherwise, for what is happening. Big Bird looks into the camera and says, “You see, everyone? Sometimes the universe tells us riddles that have no solutions.”

Uh, okay, Sesame Street, can you stop being perfect for just one second? What an amazing way to teach children that not everything in the universe can be explained with a two-minute sing-along with smiling puppets!

The episode soon moves on and seamlessly transitions into a cheerful animated segment about the number four, but we have a feeling that Ernie and Elmo hatching from Grover’s egg will be remembered as one of the most groundbreaking moments in the history of educational programming. What an incredible way to teach children that sometimes no amount of singing or cutesy little skits from an adorable Muppet can dispel an all-consuming sense of fear and confusion!

“We at the Sesame Workshop feel that this most recent episode taught children the valuable lesson that life is mysterious, bizarre, and terrifying,” said company spokesman Peter Olmstead in a statement released shortly after the episode aired. “We believe that it’s important to let children know that sometimes upsetting things will happen that will test the very limits of your sanity, and your little puppet friends won’t be able to give you any answers. How did Grover lay the egg? How did Ernie and Elmo hatch out of it? Why did Grover start breastfeeding the Count immediately after giving birth to two completely different characters? The answer for all the kids out there is, look, that’s just the way things happened. There’s no friendly scientist or kindhearted monster who’s going to show up and explain why this terrible egg nightmare unfolded before you. We want children to learn about things like counting and the alphabet, but we also want them to understand that the universe is jam-packed with horrors that defy all reason. Mr. Snuffleupagus doesn’t always have a nice, catchy ditty to sum up what you’ve just witnessed. Sometimes you just have to stand toe to toe with the void and let madness overtake you. We feel that the sooner young children learn this, the better.”

Absolutely beautiful! Grover’s baffling egg problem proves that Sesame Street hasn’t lost any of its power to teach kids valuable lessons about life and the world around them, and how sometimes that world is cruel and incomprehensible in a way that can’t be summarized by a few quick rhymes and a sappy melody. Sesame Street just set the bar for educational TV incredibly high, but we have no doubt that the geniuses at the Sesame Workshop will find ways to top themselves and continue educating the children on the world for many years to come!