Environmentalism FTW: NASCAR Is Cutting Down On Emissions By Replacing All The Race Cars With A Single Bus That Drivers Share 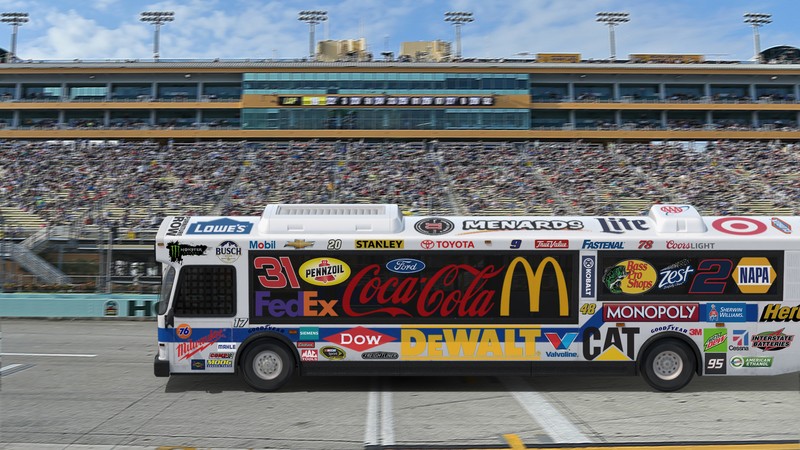 Everyone knows NASCAR has a carbon-footprint problem. The sport is responsible for emitting more than 4 million pounds of carbon dioxide into the atmosphere every year, and clearly overdue for some eco-friendly changes. Luckily, if this bold new initiative is any indication, the league is finally taking its environmental impact seriously: NASCAR will be cutting down on emissions by replacing all the race cars with a single bus that drivers share.

Effective immediately, NASCAR is dropping the number of vehicles allowed on its track during a race from 43 stock cars to just one 43-seater bus in an effort to promote environmental sustainability. This marks a dramatic change for drivers, who previously raced in their own individual vehicles and typically only managed to get two to five miles per gallon at race speed. Now, at the start of each race, every driver will board the same bus together, buckle up, and race to the finish as one group using a hybrid electric engine capable of traveling more than 200 miles on a single charge, which league officials say will decrease NASCAR’s yearly fuel consumption to record lows. Showing that NASCAR’s commitment to conservation is real, the bus will also travel at a steady 55 mph for the entire race, which is the most fuel-efficient speed.

Without a doubt, this move to a single bus instead of several dozen competing cars is the greenest NASCAR has ever been in its 70-year history. Gone are the days of excess exhaust from stock cars idling while stuck behind a 25-car pileup and from each individual driver revving their own engine at the starting line. Further, with all the drivers sharing just one pit crew, the number of petroleum-based rubber tires used by each driver will be cut by more than 98 percent!

Truly, the benefits of reducing the number of cars on the track to a single bus seem endless.

“At the end of the day, we asked ourselves, why continue using 43 vehicles for a job you only need one bus to get done?” explained NASCAR President Brent Dewar in a press release announcing its shift to an eco-friendly bus. “The clock is ticking for our planet, and we’ve all got to do our part in preserving it, so minimizing the number of vehicles on our tracks was our only logical way forward. Aside from the obvious financial and ecological benefits, another thing I love about NASCAR switching over to this ecological bus is how quiet it is compared to 43 stock cars going 200 mph. I think NASCAR fans will love how much noise pollution this will eliminate, too.”

It’s official: NASCAR has turned itself into an environmental leader overnight.

Wow. You’d be hard-pressed to overstate just how revolutionary this is for a sport so notorious for its environmental impact. Hopefully other motorsports, such as Formula One and motocross, take note and consider switching to a single-bus system as well, because the time to take action against climate change is now. Kudos to NASCAR for leading the way to a greener future!