Faith In Humanity Restored! This Wealthy Museum Owner Donated A Sphinx To This Local Elementary School And Changed These Kids’ Lives Forever 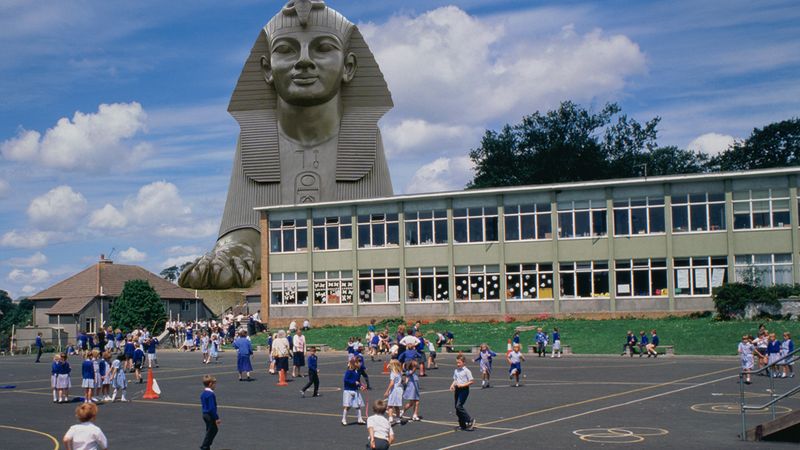 A month ago, the kids at Robert Bell Middle School in Lincoln, NE were just students at another struggling public school. The faculty was dedicated but understaffed. School supplies were few and far between. The kids were willing to learn, but the school was simply too underfunded to adequately teach them. There were even rumors that the school was going to be shut down.

All of that changed, though, when the school’s financial troubles came to the attention of Raymond Plymouth, the millionaire owner and chief curator of the Plymouth Foundation Museum of Natural History. Plymouth’s gift to the school was not just generous; it was one of a kind. Plymouth gave Robert Bell Middle School one of the museum’s most valuable treasures—a 300-foot-long Egyptian sphinx.

“Mr. Plymouth’s donation just means so much to us,” said the school’s principal, Ariel Billings, who also headed up the sphinx’s $3 million transportation and installation process. “Before Mr. Plymouth’s gift, our school couldn’t afford enough chalk or textbooks, but now we have an entire sphinx! The kids don’t even need textbooks—why read about history when you’ve got a real live piece of it right in your school?”

Because of the sphinx’s massive size, six helicopters were needed to airlift the gift to the school, where it was dropped on top of an existing building. This structural rearrangement not only has enabled an Egyptian relic to fit on school grounds, but has also had the added benefit of eliminating over 65 out-of-date classrooms. The school’s 1,500 students now gather in the remaining 15 rooms to learn together, grow together, and, of course, admire their school’s beautiful new Egyptian sphinx together. Incredible!

The Plymouth Museum’s donation has proven to be a gift that keeps on giving for Robert Bell Middle School. The sphinx obstructs most of the major corridors in the building, so students traveling across the school are required to climb over it. This new route allows them to encounter ancient history face-to-face on a daily basis. The sphinx is also so large that it can be seen from anywhere in the school, which means that even when a student is in math class or English class, they’re learning a little bit of history as well.

In recognition of Mr. Plymouth’s generosity, the school board has elected to change the school’s name to Raymond Plymouth Middle School as a lasting testament to the impact he has had on these kids’ lives. Every now and then, it’s important that we remind ourselves that people aren’t always the absolute worst. Raymond Plymouth and his sphinx have done just that. Faith in humanity restored!