Farewell To An Icon: Anna Wintour Is Being Dragged Off To The Woods By Deer 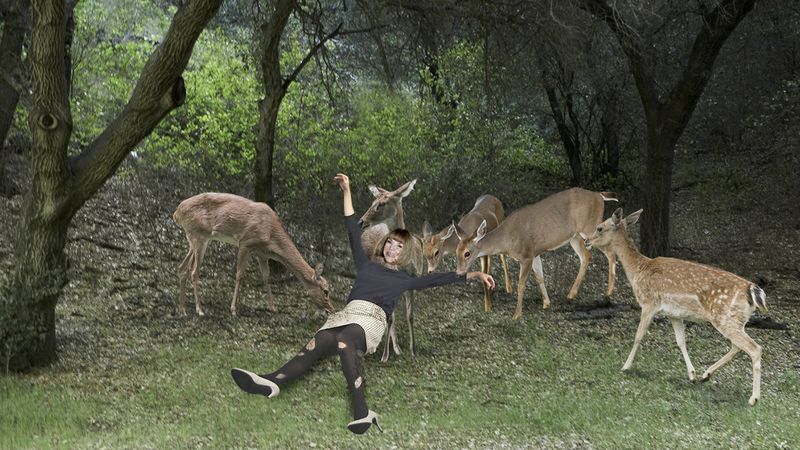 You may want to get a box of tissues ready, because this is some truly heartbreaking news about one of America’s most revered cultural icons. Vogue editor-in-chief Anna Wintour, for decades a visionary force and gatekeeper of the fashion world, is currently being dragged off to the woods by some deer.

After nearly 30 years of serving as the unofficial queen of the fashion industry, the 67-year-old Wintour was suddenly and unexpectedly swarmed by a herd of frenzied deer while leaving a lunch meeting in Westchester County earlier today and is now being pulled against her will into the wilderness. Her trademark bob, typically immaculate, is now tousled and caked with dirt as the deer, deranged and wild-eyed, tow her off beyond the tree line and away from her post at the forefront of style.

Many of the deer look sick.

Though a fierce champion for young undiscovered designers, Wintour is perhaps better known for her notoriously intimidating persona, perpetually sporting dark sunglasses and a stern demeanor that she retains even at this very moment, remaining expressionless and utterly composed as the rabid animals drag her through ditches and brambles. Her everyday uniform of severe Chanel suits paired with sleek miniskirts—an ensemble presently marked with spatters of rank deer urine—evinced the balance of quiet elegance and unyielding discipline with which she became synonymous.

Since she assumed the top editorial post at Vogue in 1988, Wintour’s influence in the fashion industry has been unparalleled, a fact that does not seem to impress the deer, who at this moment are angrily huffing and fighting over which direction to yank her in. Little do the agitated beasts know that the crumpled bag of bones they are bringing to the forest as a treasure has long been a treasure to culture at large, having ushered in countless new fashion trends and stars during her legendary career. Though they appear to prize her more than the broken tube TV that they are also towing to the woods, Wintour is a singular figure in the fashion industry whose kitten-heel Manolo Blahnik shoes can never be filled.

There is no use calling 911 at this point because the woods don’t have an address, and police wouldn’t know where to go.

Seeing such a powerful and iconic woman go out like this is truly devastating, yet despite how small and frail the insane deer might make her appear, Wintour will leave behind an enormous legacy that colors the fashion world for centuries to come. She will be missed.