Girl, Run: This Woman’s Been With Her Boyfriend For 3 Years And Still Hasn’t Met His Wisecracking Bewitched Furniture 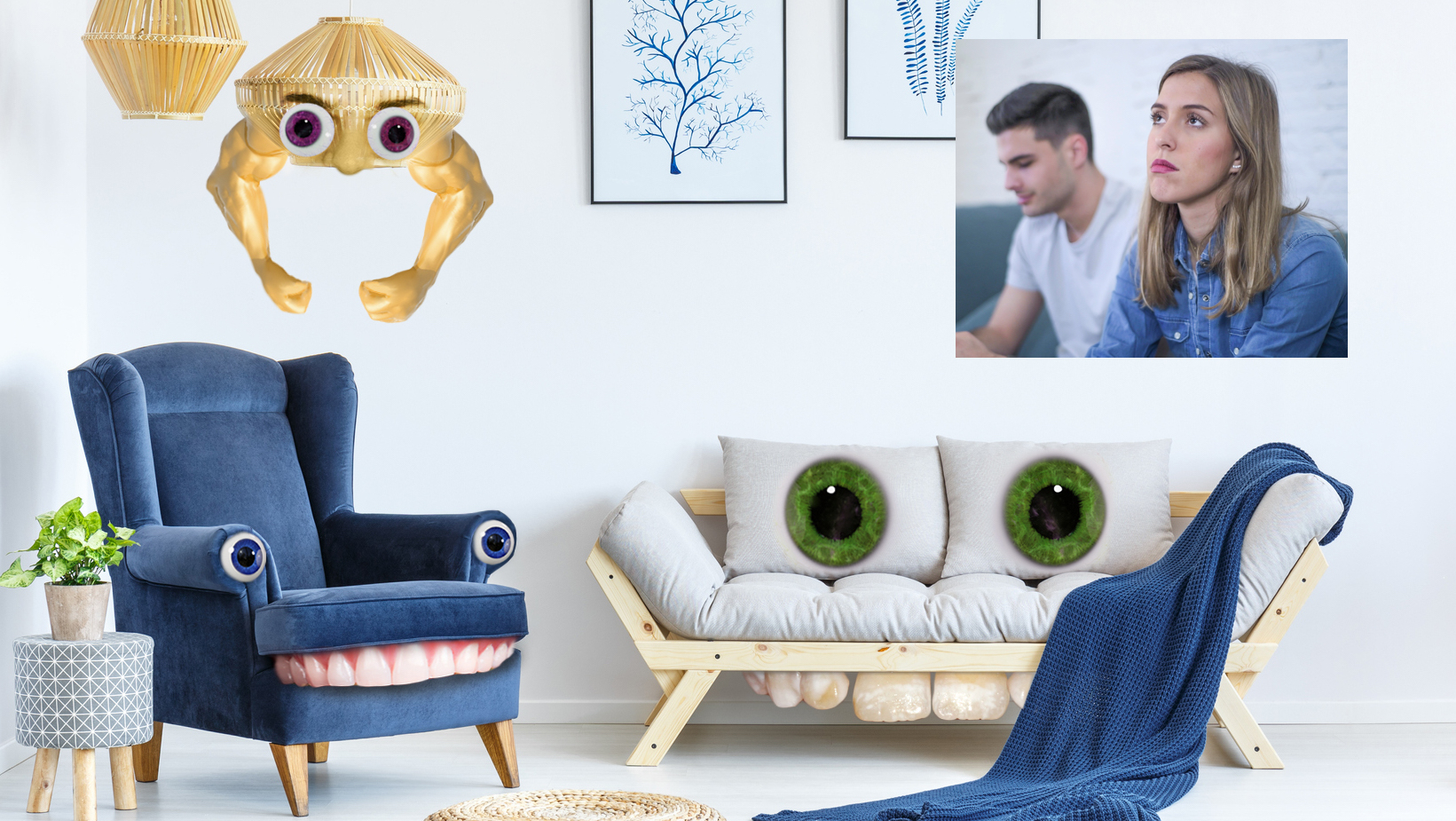 It’s hard to know when to cut your losses and ditch a relationship, but sometimes the red flags are so glaring that you’re really not left with any other option. Case in point: This woman’s been with her boyfriend for three years and still hasn’t met his wisecracking bewitched furniture.

Yikes, girl. Time to get the hell out and never look back!

Lucy Simmons and Jake Rosetti have been dating exclusively since June of 2018, but in all that time he’s somehow never once managed to introduce her to the mischievous sentient objects that exchange an endless barrage of catty barbs with him and one another while dutifully performing chores around his apartment and singing songs about it. Sure, it’s not like we expected him to bring her over the week his crotchety old armchair was too surly from a painful reupholstering to sing the bass part on “Suck It Up! (The Vacuum Shuffle),” or the time his grouchy, tough-talking lamp was so upset by the kettle calling him a “glorified coat rack” that he refused to illuminate the living room for a month, but the fact that Rosetti’s never even suggested it once in three years should ring some serious alarm bells. After all, he can’t act like the idea’s never occurred to him, because his loutish Cockney mirror performs a comic patter song every morning haranguing him to bring home someone pretty so he can reflect something besides Rosetti’s ugly mug for a change.

While we don’t know Rosetti’s exact reasoning, there’s no way it bodes well for the couple’s long-term prospects. Is he not bringing her home to meet his kooky, limerick-spouting sofa because he doesn’t think she can handle its bawdy rhymes at the expense of whoever’s rear-end is currently sitting on it, or, worse, does he not trust her enough to be a good sport and play along with the furniture’s choreographed renditions of “The Bedtime Boogie” that they perform every night to remind Rosetti about the importance of brushing his teeth before going to sleep? Is he insecure that his playfully amorous Spanish coffee table might try to upstage him by dancing a steamy samba, using the salt and pepper shakers as maracas? Or does he simply not view their relationship as serious enough to let her engage in an escalating series of woodworking puns with his cheeky cabinets while his offensively caricatured yet diligent kitchen appliances autonomously whip together a spaghetti dinner and belt out their heartrending love ballad “Da Belle Of Da Meat-A-Ball”?

Sorry hon, but this relationship is 100 percent dead in the water.

Lucy, you need to get out there and find a man who will introduce you to his enchanted furniture, say “This is the woman I love,” and then good-naturedly soak up his potty-mouthed toilet’s funk-inflected ribbing about how you must also be under the effects of a curse to wind up with a bum like him. There are thousands of guys who would be happy to show you off to their glib, sardonic armchair before wryly tossing a duvet over it when it makes exaggerated retching noises while the two of you kiss, and if Rosetti won’t do that, that’s his problem, not yours. Breaking up sucks, but you can’t wait for him forever, as unlike his furniture, you don’t have a spell eternally binding you into the form of a musical, sentient household object until Rosetti finally apologizes to the powerful witch of the woods he once wronged. You have a couple more years of your twenties, and it’s time to stop wasting them on this total non-starter.

Seriously, it’s time for her to cut her losses and run. Here’s hoping Lucy will dump this loser ASAP and find a man with a colorful assortment of animate furniture who truly cares about her!