Going Undercover: Jeff Sessions Has Disguised Himself As A Cartel Member And Strapped Himself With A Surveillance Wire In Order To Read The Wikipedia Entry For Marijuana 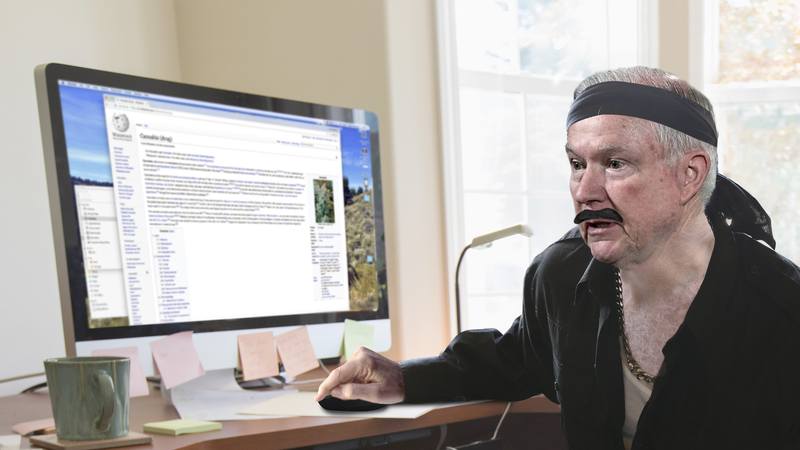 Attorney General Jeff Sessions is a polarizing figure, but no matter where you stand politically, you’ve got to admit that he’s the kind of public servant who’s committed to pursuing his ideological goals. In a stunning act of courage, Sessions has gone deep undercover by disguising himself as a member of a drug cartel and donning a surveillance wire in order to read the Wikipedia entry for marijuana.

Wow. It looks like Jeff Sessions is willing to put it all on the line for the causes he believes in!

According to reports from the Department of Justice detailing Sessions’ covert operation, the attorney general prepared to read the Wikipedia entry for marijuana by dressing himself in clothing common among members of a Mexican drug-running syndicate and putting on a false mustache in order to take on the appearance of a member of a drug cartel. Sessions also strapped a hidden recording device to his chest in order to gain potentially valuable intelligence during his stint undercover reading Wikipedia’s basic overview of cannabis.

Completely transformed from his typical buttoned-up persona, Sessions then sat down at the desktop computer in his home and typed the words “marijuana (drug)” into Wikipedia.

As Sessions scrolled through the article, which provided a general overview of the chemical and biological facts regarding marijuana as well as its effects as a recreational drug, the attorney general repeatedly announced to nobody in particular that his name was “Edgardo Perez,” a veteran drug smuggler from the Mexican city of Nuevo Laredo who was excited to learn more about marijuana from Wikipedia.

Despite the intensity of the situation, Sessions was able to maintain his cover as Edgardo and keep his composure as he read about how a bong worked in the “Consumption” section of the Wikipedia article. The undercover attorney general also calmly nodded and said in fluent Spanish, “Of course, that’s something I knew already,” numerous times as he read Wikipedia’s description of ancient cannabis cultivation during the Bronze Age, just like an experienced cartel member would.

Wow. No matter your political leanings, you’ve got to admit that Sessions was incredibly brave to undertake this mission.

The attorney general nearly got through the entire Wikipedia article while successfully maintaining his identity as a cartel member. However, when he read that marijuana can be consumed in the form of a concentrated resin called hashish, Sessions panicked and began yelling, “Pull me out! Pull me out!” into his surveillance wire. Members of the Justice Department immediately rushed into Sessions’ computer room and pulled the attorney general to safety.

Absolutely incredible! There are very few politicians who would be willing to go as far as Jeff Sessions to put a stop to cannabis use. Here’s hoping the time he spent undercover reading the Wikipedia article for marijuana pays off!