‘Golf Questions Only, Please’: A Frustrated Tiger Woods Just Stormed Out Of A Press Conference After Reporters Only Wanted To Talk About His Beautiful Homemade Ketchup-Packet Gown 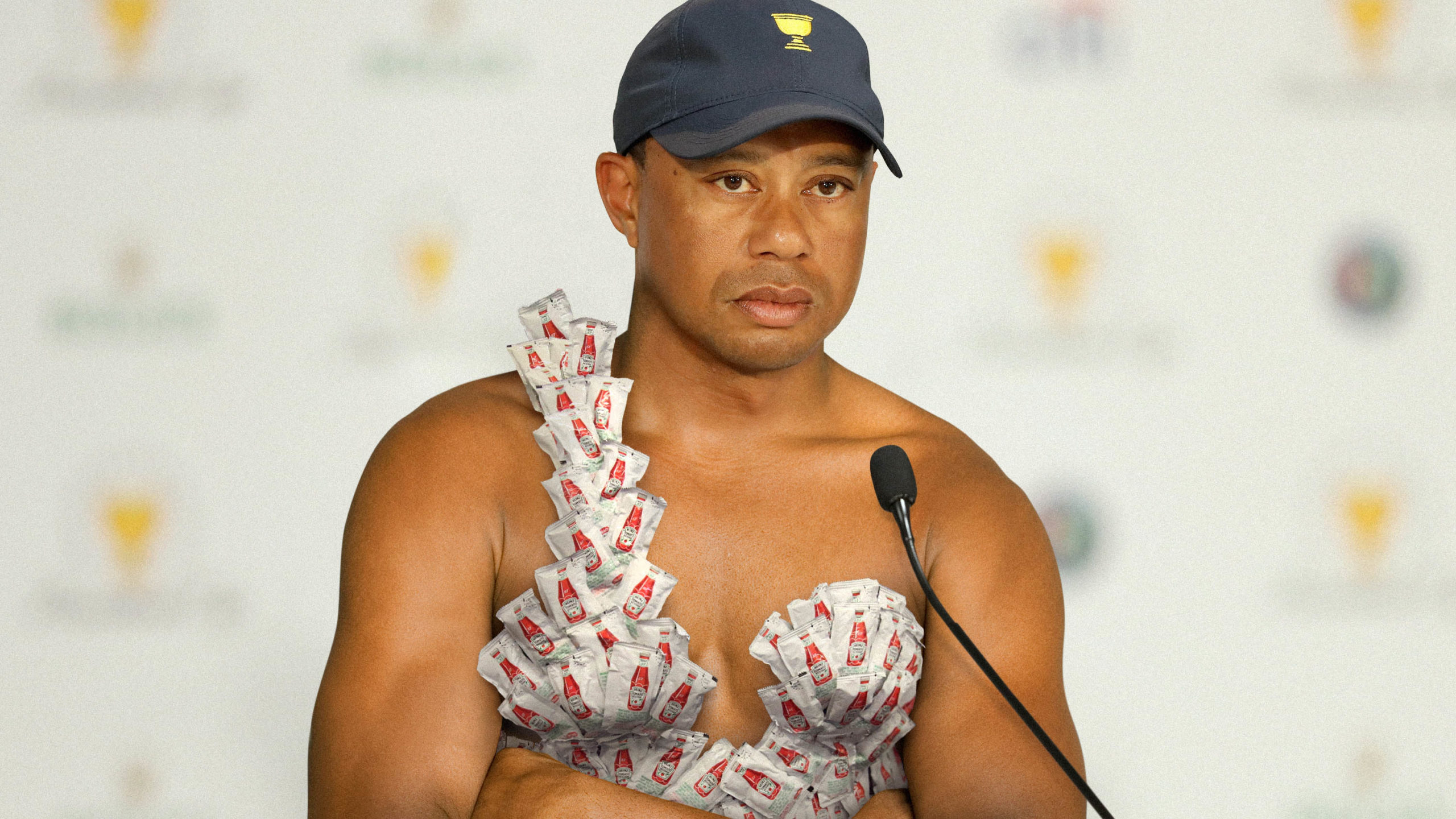 Hoo boy, well, this was awkward. There was a bit of drama today at a press conference when former World Number One golfer Tiger Woods lost his cool and ended up dropping some F-bombs and storming off after reporters wouldn’t stop bombarding him with questions about the gorgeous handmade ketchup-packet gown he was wearing.

Damn. Tiger does not seem too happy.

The breathtaking fitted-bodice A-line gown, which Woods meticulously constructed over hundreds of hours out of ketchup packets he stole from Wendy’s, was clearly an object of fascination for reporters, who immediately strayed from asking questions about the 11-time PGA Player of the Year’s golf game and began probing for more details about the one-of-a-kind garment. Tiger’s attempts to steer the conversation back to golf failed miserably, and he quickly lost his cool.

“Jesus fucking Christ, are you seriously asking me—at a press conference about golf, of all places—to explain the technology I created to keep the ketchup packets from bursting when I sit down?” yelled an exasperated Woods, looking beyond elegant in the perfectly tailored gown as he went on to angrily describe the proprietary adhesive he coated the packets with to prevent punctures. “Seriously, this is fucking amateur hour right now. How can you call yourselves professional journalists and yet apparently have zero fucking interest in covering what you’re supposed to cover? I’m a golfer, and I’m here to talk about golf! Who fucking cares what I’m wearing?”

Woods then furiously knocked aside the microphone and marched off the stage, allowing reporters to glimpse another angle of the dress’ mesmerizing silhouette.

In the hours since the incident, footage of Woods’ meltdown has been playing pretty much on loop on ESPN and the Golf Channel, and the internet is having an absolute field day. Remix videos of the four-time Masters winner screaming “This press conference has nothing to do with my stunning ketchup-packet evening gown or the striking way it complements my figure—this is about golf, you goddamn morons!” have been quickly racking up millions of views, and the hashtag #golfquestionsonly is now trending globally on social media.

Yikes. Tiger probably should’ve realized that if you’re going to wear a dress that lovely to a press conference, it’s definitely going to attract some attention. Lucky for him, though, the unparalleled beauty of his ketchup-packet gown will almost certainly linger in the public’s memory far longer than the tantrum it provoked.