‘He Didn’t Deserve You’: When This Woman’s Husband Of 50 Years Passed Away, Her Neighbors Joined Together To Make Her A Powerpoint About What A Fuckboy He Was 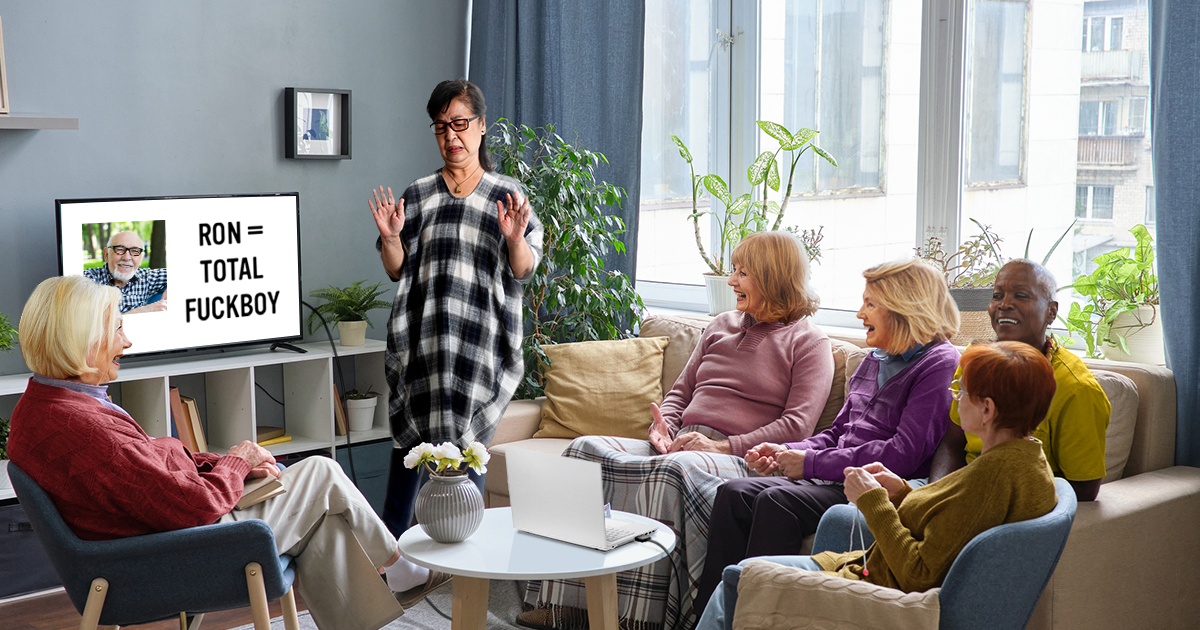 If you were looking for something to cheer you up, you’ve come to the right place, because the following story is definitely going to make you smile: When this woman’s husband of 50 years passed away, her neighbors joined together to make her a PowerPoint about what a fuckboy he was.

Yass! It’s about time you recognized your worth, queen!

Boise residents Ron and Lisa Harmon had been together since 1970, so you can imagine how upsetting it was for Lisa when her husband lost his battle with pancreatic cancer late last week. Fortunately, rather than let Lisa suffer alone through the grief, her neighbors quickly leapt into action and presented her with a PowerPoint explaining that Ron was actually a manipulative fuckboy who clearly cared more about getting his dick wet than her feelings.

As they handed Lisa a big glass of red wine and a pint of Ben and Jerry’s, her neighbors explained that she shouldn’t waste her time crying over some 84-year-old manchild who didn’t even deserve her in the first place, especially since he’d rarely ever respond to her texts, and when he did, he’d give really brief one-word answers. Not to mention, the only thing he wanted to do with her since his recent hip surgery had made walking difficult was Netflix and chill – even though a real man will want to show you off by taking you on romantic dates out on the town.

Ew, seriously, Ron? What a man-whore.

To make sure that Lisa didn’t shed another tear over this d-bag who was pretending to be “the one” while really being a player just looking to hump and dump, her neighbors spared no detail in explaining what was toxic AF about Ron’s behavior. Check out one of the PowerPoint slides below: 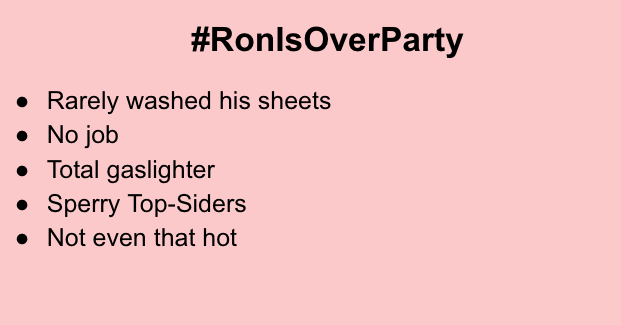 Wow. You were totally way out of his league, girl! He was holding you back!

Lisa’s neighbors concluded the presentation with a slide listing the contact information of a few nearby men who she could rebound with, since the only way to get over a fuckboy is to get under a different one.

This is so amazing! It just goes to show what the power of community can do to lift someone’s spirits and make them realize that there’s no use sitting around feeling bad about a selfish loser who couldn’t commit! Way to go, ladies!