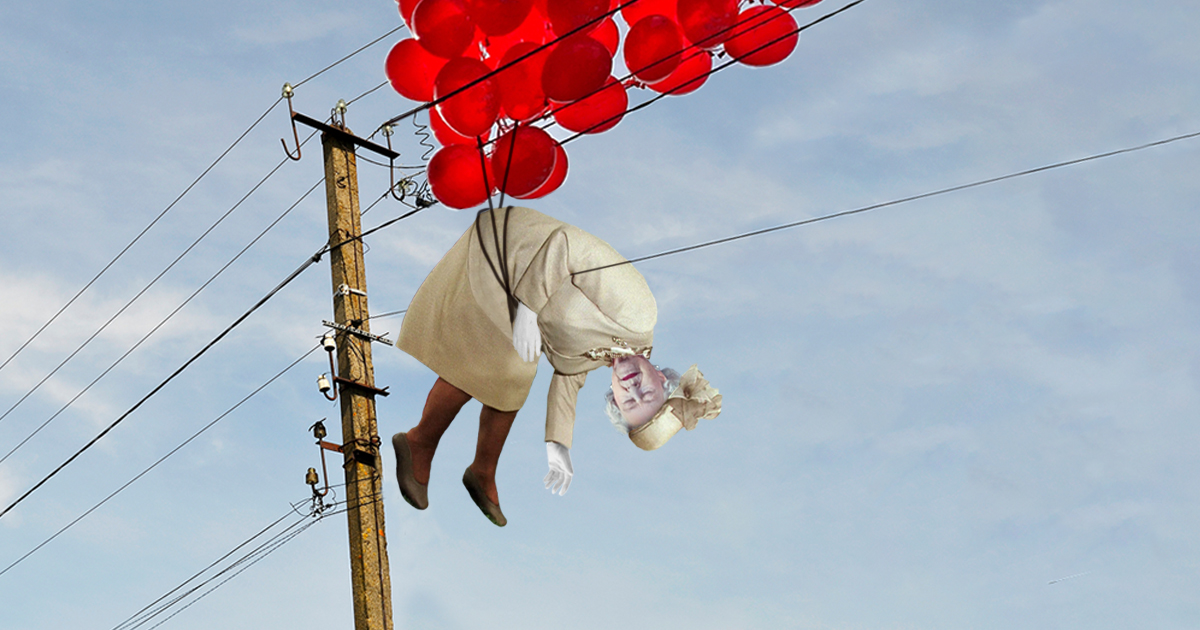 Following the requisite period of mourning after her death earlier this month, Queen Elizabeth II finally began her ascent into Heaven. However, the late monarch’s trip to Eternal Life has hit an unfortunate snag: The balloons carrying Queen Elizabeth’s body into Heaven have gotten tangled in a power line.

Oh no! This is simply heartbreaking!

Earlier this morning, the Queen’s body was carried just outside of Westminster Hall and adorned with a dozen ceremonial balloons. Each balloon had written on it a different message, such as, “Next Stop: Heaven!” and “Watch Out Jesus, Here Comes Mrs. Trouble!” Tragically, just minutes after her remaining family members bowed their heads over her body, said the ceremonial prayer of “Yip, yip, yo, off to Heaven ye go!” and tossed the late Queen’s body into the sky, the wind blew the Queen directly toward a power line, where the balloon strings quickly became a tangled mess and her majestic corpse got all pretzeled up in the wires.

British officials debated how to best rectify the situation, but most obvious solutions were ruled out immediately. For instance, if they were to cut the power line, all of England would permanently lose power, and if they cut the balloon strings, the Queen would fall downward into Hell. Officials decided to tie several balloons reading “Emergency” to a guard and send him up to the power line to untangle the Queen, but the wind changed course just as soon as he began to get close, and although the guard reached toward the Queen to grab hold of her, he merely pulled off one of the Queen’s shoes and floated up past the clouds instead.

Good Lord! Now the guard’s going to Heaven, and the Queen’s missing her damn shoe! This is a dark day for England indeed.

Insiders confirm that British officials are currently gluing together as many ladders as they can find in order to make one long enough to climb up to the Queen, at which point they will cover her with Vaseline to hopefully loosen the strings up.

Wow. What a truly disastrous ordeal! This is the type of horrible situation that you hear about happening all the time, but which you never think could happen to a monarch you’ve heard of. It’s a sobering reminder that the path to Heaven is dangerous and full of traps, even for the Queen of England! Here’s hoping the Queen’s body finds a way up to Heaven soon, because dangling from a power line is no way to spend the afterlife.