Heartbreaking: This Man Is Being Haunted By Slimer But He Can’t Call The Ghostbusters Because They Aren’t Real 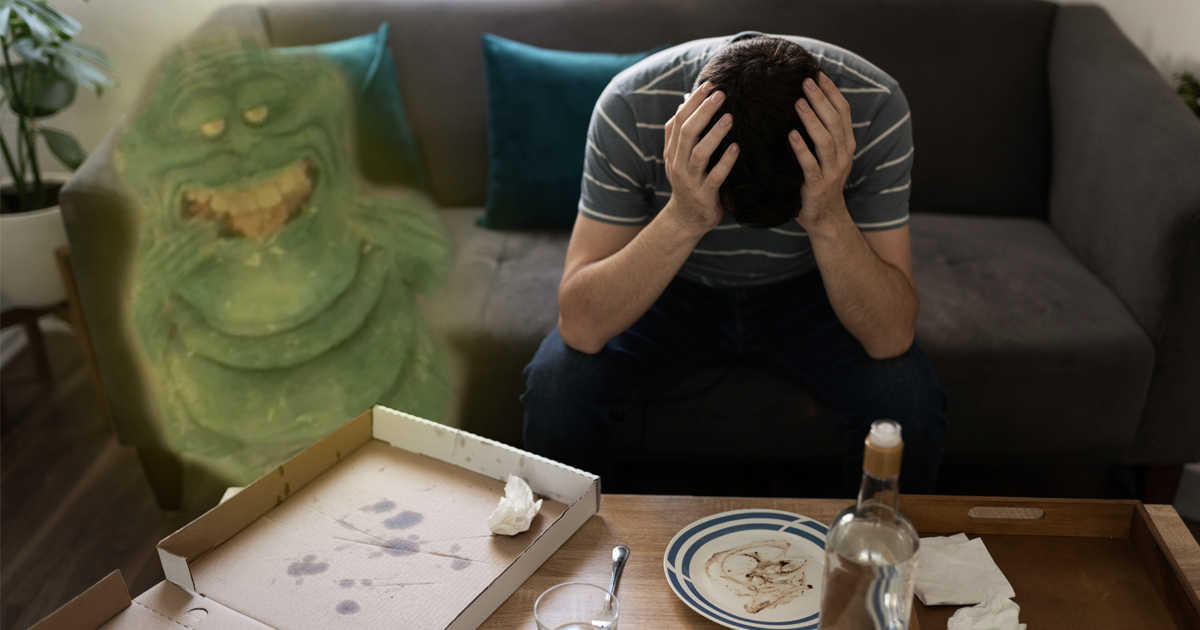 It’s incredibly frustrating to find yourself in a difficult situation that you’re powerless to change, but it’s even more frustrating when there’s no one else you can turn to for help in your time of need. Case in point: This man is being haunted by Slimer, but he can’t call the Ghostbusters to get rid of him because the Ghostbusters aren’t real.

Three weeks ago, Mark Schueller, a 45-year-old music teacher from Bend, Oregon, came home from work to find Slimer the obese green ghost flying around his kitchen grunting like a hog and messily gorging himself on all the food he could get his hands on.

“He was stuffing an entire roast chicken and honey-glazed ham in his mouth at the same time while whizzing through the air knocking over everything in my kitchen,” says Mark. “I knew the only way to get rid of him was to call the Ghostbusters so that they could vacuum him up with their nuclear-powered proton packs, but unfortunately for me the Ghostbusters are fictional characters. How am I supposed to get rid of Slimer when the only people who can stop him are imaginary men from an ‘80s movie?”

It’s truly terrible that the Ghostbusters aren’t real, because Mark says that being haunted by Slimer has made every aspect of his life a living hell. Last week, Mark had his mother over for dinner, and Slimer transported through the ceiling from upstairs and dove face-first onto the table, splattering Mark’s poor mom with a shower of mashed potatoes and gravy as he noisily devoured every scrap of food in sight.

Then Slimer used his enormous tongue to lick all the food off of the old woman’s face, and he was so overzealous that he also slurped up her pearl necklace and her wig, leaving her bald, weeping, and covered in ectoplasm while Slimer continued to zoom around the kitchen wildly flailing his arms around and screaming like a lunatic.

“My mom was standing there crying and all I could do was try to swat Slimer away with a rolled up magazine, but my hand just whizzed right through his transparent body because he’s a ghost,” said Mark. “It’s times like these that I wish I could call trained professionals to hunt him down with ghost-detecting goggles and use positron collider guns to trap him in an ecto-containment unit, but sadly people like that only exist in the movies.”

Unfortunately for Mark, Slimer’s antics have only gotten worse as the haunting has continued. His grocery bills have nearly tripled because every time he brings food home, Slimer immediately materializes out of thin air and empties the contents of the grocery bags directly into his mouth. Like the thousands of people who have been haunted by Slimer before him, Mark will probably have to move to a new city or commit suicide in order to free himself from the hideous green phantom. How helpless he must feel knowing that the only people who can save him from Slimer are fictional characters invented by Dan Aykroyd and Harold Ramis decades ago!