Heartwarming! When This Terminally Ill Kid Made A Wish To Poke Around on LaKeith Stanfield’s Mobile Banking App, LaKeith Said Go For It 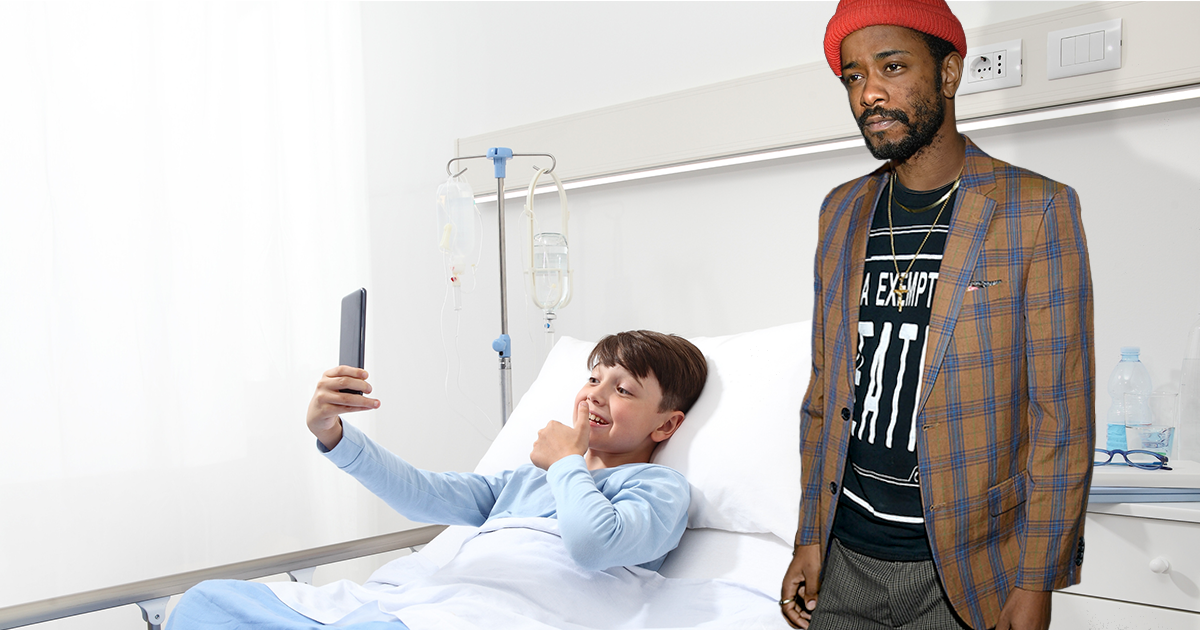 There’s nothing better than a major Hollywood star who’s willing to take time out of their busy schedule to make another person smile, and here’s a story of celeb doing just that: when this terminally ill kid made a wish to poke around on LaKeith Stanfield’s mobile banking app, Lakeith said go for it.

Ten-year-old Hunter Greenwell of Jackson, Mississippi has late-stage leukemia, and when the Make-A-Wish foundation reached out to him to see if he had a wish they could make come true for him, he immediately knew exactly what he wanted: to get his hands on LaKeith Stanfield’s phone and spend an afternoon leisurely perusing the various tabs and sections of his Bank Of America app. Thankfully, Make-A-Wish was able to contact LaKeith with Hunter’s request, and the generous Judas And The Black Messiah star wasted no time saying “Sure, that’d be fine.” A week later, Stanfield appeared at the hospital by Hunter’s bedside and used his thumbprint to log in to his mobile banking interface. He then handed the excited boy his iPhone and said, “Have at it, bud,” letting Hunter tap around in his mobile banking app while he sat off to the side watching an episode of Judge Judy on the hospital room TV.

Hunter has unfortunately been through years of arduous cancer treatments, but all that pain melted away when he got the chance to scroll down to the “Account Info” section of LaKeith’s main checking account and click “View Account Number” to see the 12-digit code that the acclaimed film and TV star uses anytime he has to set up a direct deposit. The overjoyed Hunter then spent 15 minutes silently exploring the rest of the app, occasionally muttering things like “Wow, he went paperless,” and “Cash back on dining, that makes sense,” while LaKeith sat patiently a few feet away. According to Hunter’s grateful mother, the highlight of the visit was when Hunter took out a legal pad labeled “L. STANFIELD BANK STUFF” that he had clearly been saving for the day, and filled in a little section titled “RECURRING SUBSCRIPTION PAYMENTS” with a list of monthly charges LaKeith pays for things like Hulu, GQ Magazine, and the Headspace app.

It’s unfortunate that Hunter had to endure such a terrible ordeal in order to meet LaKeith and scope out the budgeting tab on his banking app, but you wouldn’t have known he was suffering at all based on how excited and full of life he was during LaKeith’s visit. You could tell how much the day truly meant to him when, after timidly asking LaKeith if he could take a peek at his FICO score, the Sorry to Bother You star replied, “Yeah, knock yourself out,” eliciting a squeal of pure joy from the terminally ill boy, who then applauded gleefully upon discovering that LaKeith’s credit was holding strong at 796.

Yes! It doesn’t get any more heartwarming than this.

Kudos to LaKeith for giving up his iPhone for a little while to make a sick child’s dream come true. Here’s hoping this inspires more celebrities to use their influence for good.