Historic Discovery: Archaeologists Have Uncovered The Cellar Containing All Of Jesus’ Exoskeletons 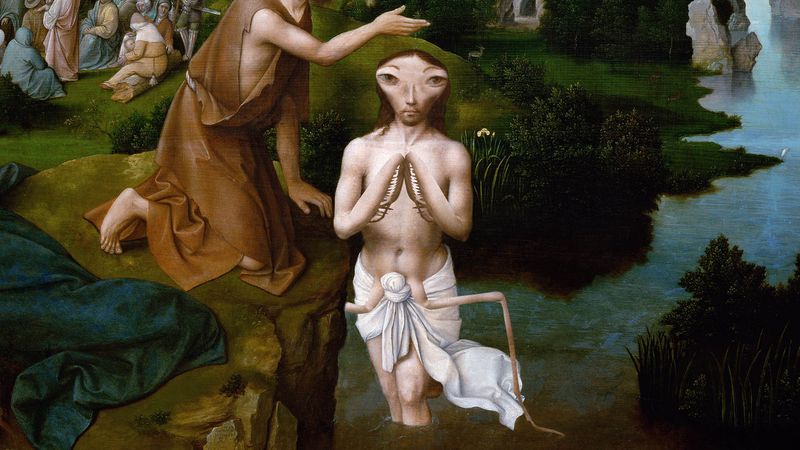 Sit down, take a deep breath, and get ready to have your mind absolutely blown, because archaeologists at a dig site near Jerusalem just discovered something truly historic. After almost 2,000 years, humanity has found the ancient cellar containing every exoskeleton shed by Jesus Christ himself.

And the most incredible part? They’re still there.

A team of researchers from The Hebrew University of Jerusalem were excavating Roman-era ruins to the northeast of the city when they uncovered a trap door in a stonemason’s house, marked with the ichthys symbol of the early Christians. And when they pried it open, they realized they’d stumbled across the find of the millennium: 15 delicate exoskeletons, almost perfectly preserved and almost certainly shed by the historical Jesus Christ.

Jesus’ regular molting is well documented across the New Testament, from his shedding on the shores of Galilee to his baptism by John:

“And Jesus, when he was baptized, went up straightaway out of the water: And lo, he scuttled from the banks into a copse of fig trees. And there he did wriggle, and strain at his shell, and his mandibles did gouge a seam upon his chest, until at last he squirmed free, pale and new. And John saw that Jesus was soft now, and sticky with amnii, and he cried out, ‘Lord, you are prey!’ And Jesus hissed” (Matthew 3:16-21).

Christ was also known to drag his discarded husks into caves and cisterns for safekeeping, though whether he did so intentionally or was driven to by instinct remains a hotly debated question among theologians. After his death, his followers were believed to have collected the exoskeletons in a secret cellar, fearing for their destruction at the hands of the Romans, who had already seized most of Jesus’s debris-and-spittle nests. Two millennia later, their extraordinary efforts have given us the most substantial biblical discovery since the Dead Sea Scrolls.

The researchers found 15 empty exoskeletons in all, ranging from a papery, medicine-ball-size husk shed by the newborn Christ to robust, full-size shells molted by an adult Jesus, arranged in order along the cellar wall. Thankfully, the relatively cool, dry conditions of the cellar prevented deterioration of the shucks, including his fragile vestigial antennae nubs. The collection is almost certainly incomplete, however, as Christ was known to have devoured at least one of his skins to regain precious protein after an especially strenuous molt. One exoskeleton is conspicuously missing a foot, which the researchers noted matches up with an episode from the book of Luke:

“And, behold, a woman in the city, which was a sinner, brought an alabaster box of ointment, and stood at [Jesus’] feet behind him weeping, and began to wash his feet with tears, and did wipe them with the hairs of her head. And Jesus’ carapace was thin and loose, and she did accidentally tear away a chunk of it. And the woman screamed, and the Pharisee screamed, and Jesus sprang to the ceiling, and there he clung, until they dislodged him with a broom handle” (Luke 7:37-42).

Though details are still emerging from the dig site, Vatican spokesman Father Federico Lombardi released a statement this morning addressing this incredible discovery. “The uncovering of Christ’s preserved exuviae opens a new chapter in the history of the Holy Church, one we welcome with open arms,” the statement reads. “As Christ came out from the wilderness, His compound eyes glittering with new revelations, so do we now look ahead to how these new relics will deepen and expand our faith. May the coming weeks bring more such holy knowledge.”

The husks are so well-preserved that Hebrew University believes that their state-of-the-art imaging technology will be able to generate a model of Jesus Christ himself, down to the bristles on his forelegs. The final exoskeleton even bears deep lacerations, including a telltale puncture in its side and at its “wrists,” suggesting that Christ was deep into his shedding cycle during the passion and crucifixion. The implications here are staggering. That Jesus could have potentially slipped out of his carapace and scampered to safety, but chose not to, makes his sacrifice on the cross all the more poignant.

What a momentous discovery. These exoskeletons may be the key to unlocking more and more information about the flesh-and-hemolymph Jesus. After centuries of speculation, it all comes down to this!