Hitting The Ground Running: Steve Bannon Spent His First Meeting On The National Security Council Describing The Way He Would Kill Each Person In The Room 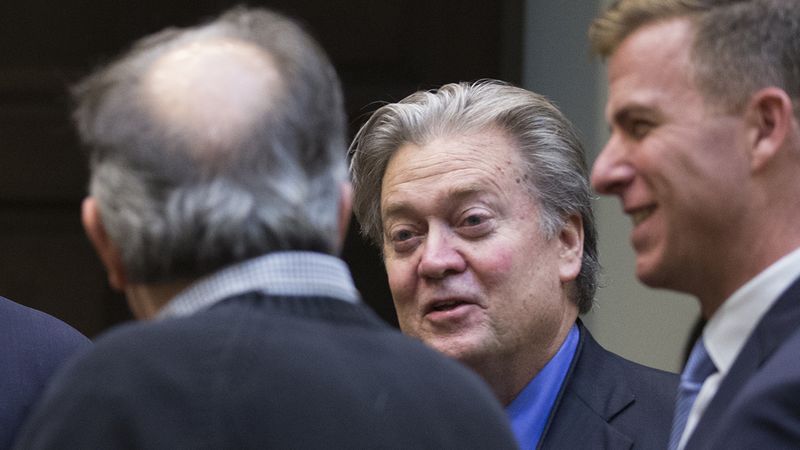 The Trump administration hasn’t wasted any time putting its agenda into action, and it looks like its officials aren’t either. President Donald Trump’s advisor Steve Bannon, in particular, has moved to rapidly extend his influence, even securing a seat for himself on the National Security Council. And today he hit the ground running and spent his first meeting on the NSC detailing how he would kill each individual person in the room.

Wow. Looks like someone’s chomping at the bit to get the ball rolling!

Bannon took control of the preliminary meeting of Trump’s Cabinet members and security advisors almost immediately, calmly but firmly slamming his fist down on the table and declaring that every motherfucker in the room better listen up. In the silence that followed, he announced that he already knew exactly how he would kill each and every person present, and added that, if he wanted it, he could be the only one who walked out of the room.

“Mike, you’d be easy,” Bannon reportedly said, jabbing a finger toward the stunned vice president. “You’re a smart guy, but your situational awareness is shit. I’d just pad up behind you in a hallway, kick out your leg with a peroneal strike, and have a loop of cheese wire around your neck before you could whimper.”

“Ever seen what cheese wire does to a trachea, Mr. Vice President?” he added, before asking, “Okay, who’s next?”

Now strolling the room, Bannon swung his attention to Rex Tillerson, and with a smirk, asked him how his coffee tasted this morning. Before the secretary of state was able to stammer an answer, Bannon chidingly suggested he switch to tea, but added that it really wouldn’t make much difference, since polonium-210 has no flavor. To punctuate his statement, he took a long sip of his own coffee, while Tillerson pushed his away.

It’s clear Bannon isn’t letting anyone get in the way of his agenda, even in small ways. When Secretary of Homeland Security John Kelly tried to initiate a discussion of issues pertinent to national defense, Bannon immediately tossed a pen directly at the forehead of the former commander of U.S. Southern Command, who failed to swat it away. Scolding him on his clumsy reflexes, Bannon asked Kelly how he expected to avoid the speeding garbage truck that would T-bone his motorcade, sealing him inside a tomb of twisted metal.

Say what you will about Bannon, but you can’t deny that he’s got a vision that he’s dead set on seeing through!

“I’ve got someone I’d like you to meet,” Bannon told Steve Mnuchin, who was startled when he suddenly felt a cold hand on his shoulder. Gesturing to the linen-wrapped figure in a faceless porcelain mask now standing behind the prospective treasury secretary, Bannon explained that it was Shiro, and that it was the last time Mnuchin would ever see him, but that he’d feel his cold hand again one more time. And true to Bannon’s word, when Mnuchin looked again, he was gone.

To Gen. James Mattis’ credit, Bannon acknowledged that he would make a worthy opponent, and that he looked forward to Mattis giving him a reason to face him down. Despite the defense secretary’s Marine training, Bannon insisted that he’d watched hours of video demonstrations of krav maga, silat, and systema and expressed confidence he could blind, disable, and kill the four-star general almost immediately. That said, Bannon admitted he would most likely just sabotage Mattis’ helicopter to avoid the possibility of being overpowered in a face-to-face confrontation.

Finally, it was Trump’s turn.

“You I’d do with my bare hands,” said Bannon, leaning forward while maintaining unblinking eye contact with the president. “You’re old, you’re heavy, you’re slow. I figure I can get you on the ground with one good swing, and then just bam, bam, bam, bam until you’re jelly from the neck up.”

His business concluded, Bannon gathered his papers and exited the briefing room, pausing to let a passing White House staffer know that he’d run his neck over on his bicycle.

Take note, America: Steve Bannon is definitely making waves in Washington. And if he has his way, he’ll be making waves all over this country for a long time to come.