Holding Themselves Accountable: NPR Has Apologized For The Steve Bannon Tiny Desk Concert Where He Played ‘Cherry Pie’ With Alex G And Waxahatchee 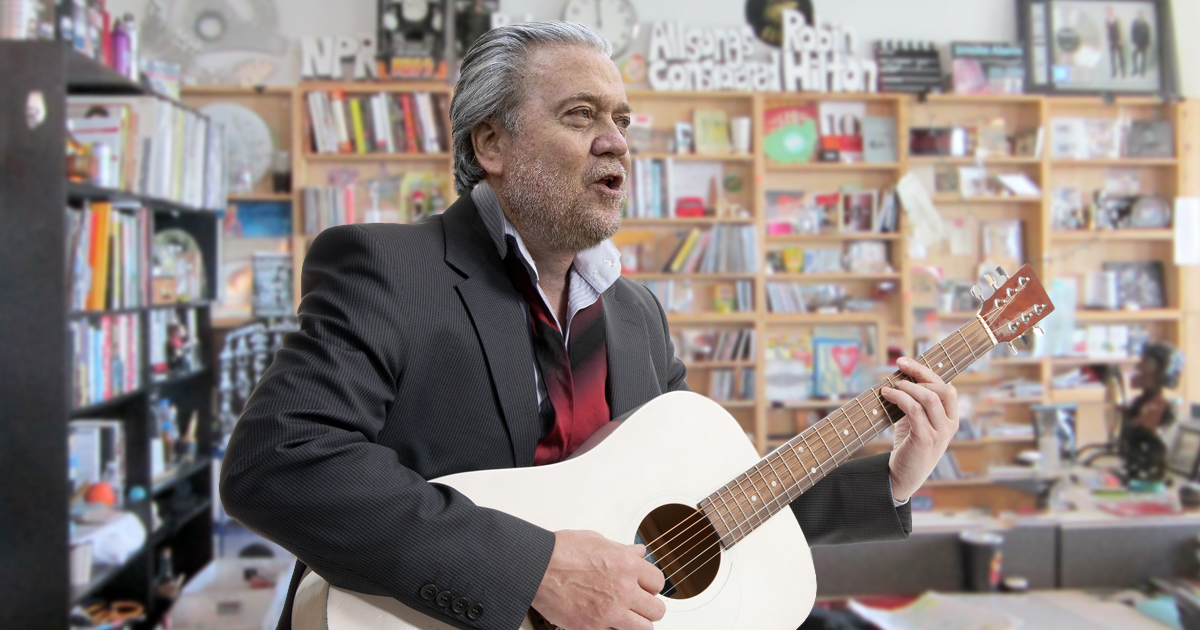 NPR’s beloved Tiny Desk Concerts series is facing some major criticism following a recent episode, but it looks like the organization is at least able to admit when they’ve messed up: NPR has apologized for the Steve Bannon Tiny Desk Concert where he played “Cherry Pie” with Alex G and Waxahatchee.

Yikes. As bad as this was, it’s good to see NPR owning up.

Last week, NPR released a Tiny Desk Concert headlined by Steve Bannon, President Donald Trump’s disgraced former Chief Strategist who was recently sentenced to four months in prison for criminal contempt of Congress after defying a subpoena from the January 6th Committee. The video, which was met with immediate backlash from NPR’s predominantly liberal fanbase, begins with Steve Bannon sitting down at the desk and noodling around on the guitar while he says, “We’re gonna play a couple songs for you today, if that’s alright with you,” receiving little to no response from the NPR employees in the room. “I’ll take that as a yes,” Bannon quips before adding, “If the Beatles could get by with a little help from their friends, so can I,” at which point he is joined by NPR darlings Alex G and Waxahatchee.

After taking their seats in front of the infamous NPR bookshelves, the trio launched into a raucous cover of Warrant’s “Cherry Pie,” with Bannon singing and playing guitar, Alex G on drums, and Waxahatchee crooning out the backing vocals. While it’s unclear why NPR thought this was a good idea, the cover was clearly enjoyed by the NPR staff at the taping, because when Bannon yelled, “Everybody now!” before launching into an a Capella version of the final chorus, the entire office can clearly be heard singing, “She’s my Cherry Pie / Cool drink of water, such a sweet surprise,” while clapping along.

Facepalm. Someone at NPR definitely got fired for this one.

The video was immediately downvoted on YouTube and criticized by NPR fans, Alex G fans, Waxahatchee fans, and Steve Bannon fans alike. Soon after, NPR removed the video and offered the following statement of apology:

“We sincerely regret producing a Tiny Desk Concert with Steve Bannon. After discovering Bannon’s SoundCloud full of thoughtful reimaginings of rock classics, we were under the impression that we were showcasing a rising star while at the same time offering viewers a chance to see exciting artists in a new setting. We now see that we were wrong. We know that we should never have given a platform to Steve Bannon, whose racist ideology has fueled hatred in this country, even if he absolutely nailed his instrumental riff in ‘Cherry Pie,’ which he then perfectly segued into an emotional cover of The Killers’ ‘When You Were Young.’ We’re sorry to our listeners and our community, and we want to thank you for holding us accountable.”

Wow. While it may take a good while for NPR’s reputation to recover from this truly ill-advised Tiny Desk Concert, it’s good to see that the organization appears to be genuinely sorry for the misstep. Kudos to NPR for trying to make things right!