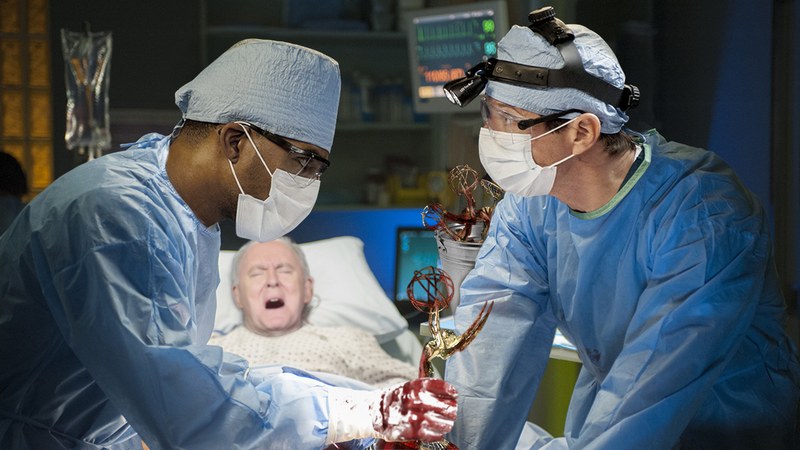 Hollywood might have been celebrating during the Emmy Awards last night, but it didn’t take long for the post-show jubilation to take a dark turn thanks to a medical emergency that has the entire entertainment industry holding its breath: The winner of last night’s Emmy for Best Supporting Actor, John Lithgow, is currently in intensive care as doctors scramble to remove 46 Emmy statuettes from his stomach.

There’s no way to sugarcoat this. Hollywood has a full-blown medical crisis on its hands.

Lithgow was admitted to the emergency room late last night after friends at an Emmys after-party noticed the actor struggling to stand, belching up big piles of Emmy statuettes, and looking disoriented. The Crown actor was rushed to the hospital, where doctors found dozens and dozens of Emmy statuettes inside his stomach. Doctors say that if Lithgow had arrived at the hospital even 15 minutes later, the sheer number of Emmys currently in his stomach would have killed him or caused him to burst open like a water balloon.

“Right now, we are working around the clock to remove the bucketful of Emmys that Mr. Lithgow appears to have swallowed,” a hospital representative informed the press and concerned onlookers this morning. “The Emmys currently in Mr. Lithgow’s abdomen are creating a number of intestinal and toxicological complications for Mr. Lithgow, and at this point the only silver lining is that the awards that are threatening his life do also honor a wide range of performers, directors, and crew members that work so hard to make the television that we love.”

If only one of John Lithgow’s so-called friends had spoken up and urged him to be more responsible before he ended up with a stomach full of Emmys, the entertainment industry could be enjoying the post–awards show glow. Now one of America’s most celebrated actors is fighting for his life, and until his intestines are cleared of the nearly 50 Emmy Awards currently endangering him, all fans and well-wishers can do is cross their fingers and hope for the best. Get well soon, John! Everyone is rooting for you!