Hot Hot Hollywood: Leonardo DiCaprio Has Put On His Corduroy Pants And He Is Walking To The Public Library To Read The Bible 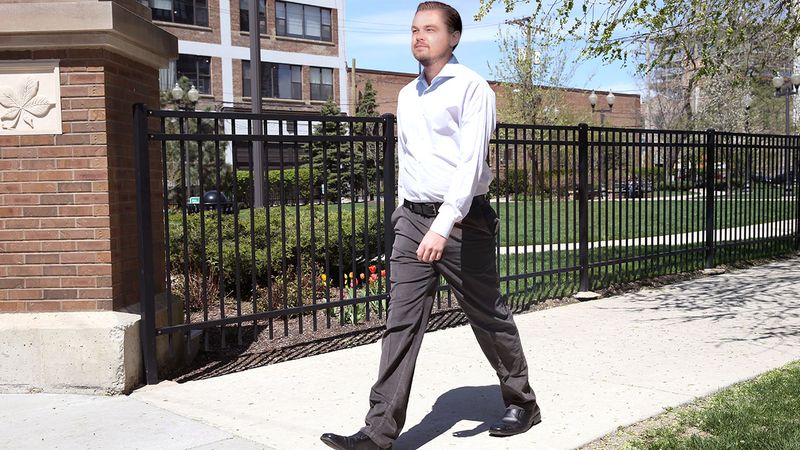 Here he comes! Yes, it’s none other than glamorous Leonardo DiCaprio from Tinsel’s Town, and if you’re not sitting down, then you’re going to want to buy a chair for the hot hot hot news that we are going to tell you right now: Leonardo DiCaprio has put on his corduroy pants, and he is walking to the public library to read the Bible.

Yes, it’s correct! Numerous sources have confirmed that Leonardo DiCaprio has got his corduroy pants pulled up high, and he is breathing heavily through his open mouth as he strolls down to the library to take the Bible down off the shelf and read some of his favorite selections from the New and the Old Testaments. Fathers, lock up my daughter, because Leonardo is on patrol in his corduroy pants!

According to multiple sources, there’s just no way around it. Leonardo has stuffed the pockets of his corduroy pants with loose potato chips. He has spread cream cheese on the potato chips, and he will eat them out of the pockets of his corduroy pants as he reads quietly from the Bible at the public library. Leonardo DiCaprio will use the page of the Bible where Noah’s son sees him naked to wipe the cream cheese off of his fingers. This is the fattest slab of Hollywood we’ve had all day!

That’s right, here he comes in his corduroy pants! It’s Leonardo DiCaprio, the star of Titanic and What’s Eating Gilbert Grape. He is sporting those corduroy pants like a master, and he is FULLY en route to the public library, where he will nod to himself while he draws a smiley face next to the passage in Leviticus where God says it’s okay to eat grasshoppers.

Leonardo is the movie star who banishes all the women to Swoon Town, U.S.A.! Tickets, please!

And that’s the fresh, steaming-hot word from Sunset Boulevard! Soon, Leonardo will arrive at the library in his corduroy pants and push the librarian out of the way as he waddles over to the shelf with the Bibles on it. Before we know it, the Revenant star will be sitting in the library chair closest to the bathroom, looking at the cover of the Bible and saying “Barbell” to himself in a quiet voice, and we just can’t wait! It’s hot hot Hollywood, baby!