Hot Hot Hollywood: Selena Gomez Has Gotten Inside Of A Subaru And Is Shuffling Cards While Listening To A CD Of Haunted-House Sound Effects 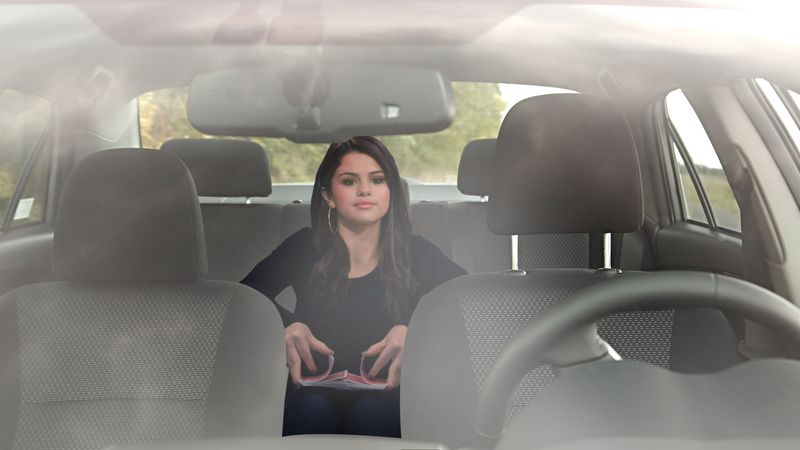 There she is! Yes, it’s the songbird princess of Hollywood Hill, it’s Selena Gomez! And if you love the Sing Queen of Westwood Boulevard as much as we do, then get ready to be on your hands and knees wailing for joy because The Gomlet has gotten herself inside of a Subaru and is sitting in the backseat shuffling cards while listening to a CD of haunted-house sound effects!

Wow wow wow wow oh wow! Sources are shouting that the “Same Old Love” singer has climbed inside the Subaru legs-first through a half-open window and inserted a CD of frightening Halloween noises such as screams and clangs but mostly clangs into the CD player of the 2003 Forester and is playing it on repeat! Her legs are not moving but her hands sure are, and they’re repeatedly shuffling a deck of novelty playing cards featuring the cast of David E. Kelley’s Picket Fences. Yes! Yes! Yes!

Yes, indeed! This gossip has the word “Hollywood” written all over it! The key is in the ignition, the engine is not on, but the battery is running, and Selena Gomez is singing along to the CD of haunted-house sound effects while shuffling her cards that are stained with au jus from her French dip sandwich that is on a plate in the front seat, but she is in the backseat with her seatbelt on and the car’s registration is expired! Oh God! Oh my God!

Call your mom and tell her she loves me, because The Gomlet is back and better than ever in the Subaru in the parking lot of the Department of Water and Power. You go, girl!

Selena Gomez fans will be pleased to learn that the Wizards Of Waverly Place star has put on her hazards and turned on the windshield wipers and cranked up the defroster and turned down the volume of her haunted-house sound-effects CD so she can concentrate on finding the aces in her deck of cards and throwing them out of the window one by one! Look out, Ariana Grande, because Selena Gomez has yanked on her seatbelt and it has locked, so if she wants to adjust it, she’s going to have to unbuckle the seatbelt, let it retract all the way, and then buckle it in once again! Shots fired!

But the drama just gets more and more of it, because The Gomlet was also spotted taking out a SECOND deck of novelty playing cards featuring the cast of David E. Kelly’s Chicago Hope, and she is now indiscriminately shuffling the two decks together while opening and closing her eyes to the beat of a series of thunder-clap sounds and the sun is just beginning to set!

Incredible and shocking and hot hot hot! It’s just another juicy day on that hill in Hollywood where movie stars are always breathing. Who knows? Maybe Selena will unbuckle her seatbelt and move to another seat in the Subaru or start playing solitaire with one of the two decks of cards she is now shuffling while the distorted sound of a howling wolf blares from the car’s speakers! There just isn’t any way to know right now, and our airways are absolutely obstructed with anticipation! It’s hot hot Hollywood, baby!