Huge Upset: An Olympic Stadium Janitor Just Won Gold In Figure Skating After He Tripped Onto The Ice And Wowed The Judges With His Surprisingly Graceful Slips And Slides 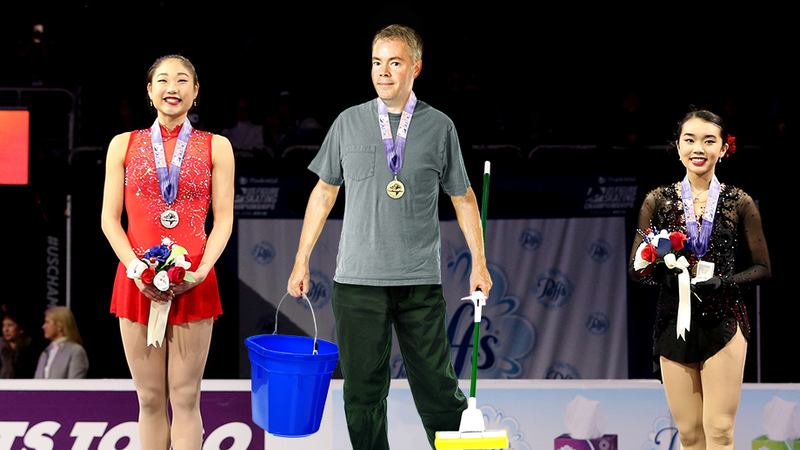 Every new Olympics brings the possibility of incredible surprises and moments fans will remember for the rest of their lives, and this year, the Pyeongchang games have already delivered in a big way: An Olympic stadium janitor just won gold in figure skating after he tripped onto the ice and wowed the judges with his surprisingly graceful slips and slides.

Wow. What an incredible upset!

The total underdog win took place when the women’s short program figure skating event had just wrapped up. Stadium janitor Ki Syonghyon leaned too far over the ice while mopping, tripping out onto the rink with his right leg lifted in an agile arabesque and his arms outstretched for balance in an exaggerated yet elegant manner. Fans making their way to the exits turned around when Syonghyon started yelling, “Whoa, whoa, WHOOOA,” spun around wildly on one sneaker-clad foot, and careened across the ice with natural grace and speed as the judges frantically thumbed through their paperwork, trying to figure who this mystery entrant was.

Chills. This is what the Olympics are all about.

Anna Higgins, one of the women’s singles figure skating judges, said that Syonghyon completely won her over when he lost control of his mop while trying to balance himself, tossing it high into the air before catching and dipping it as he slid in a deep lunge toward the center of the rink. “At that point, I wasn’t sure if I was going to judge the program as a singles or a pairs event, but I knew that whatever it was, that guy in the overalls was winning,” Higgins said.

The delighted crowd erupted into all-out cheers when Syonghyon landed a triple Lutz while slipping from foot to foot in an attempt to reach the edge of the ice and continue his custodial shift. Finally, after skidding out into a powerful Biellmann spin, the 47-year-old janitor collapsed on one knee in a dramatic ending pose that synced up perfectly with the Alicia Keys cover of “Wild Horses” that had been playing over the stadium loudspeaker. It was then that the judges, having watched his entire performance with rapt attention, each awarded Syonghyon with a nearly perfect score for both technical elements and artistry.

Although Syonghyon is not affiliated with a national team, Olympics officials confirmed that his medal will go toward the official medal total for stadium staff who accidentally wander into competition during the games.

This win was totally unpredictable, and no one is likely to soon forget it—least of all Ki Syonghyon, who we bet has a few sponsorship deals coming down the pike. All we can say is that we’re going to keep tuning in, because at this rate, this is going to be the most exciting Olympic games of all time.