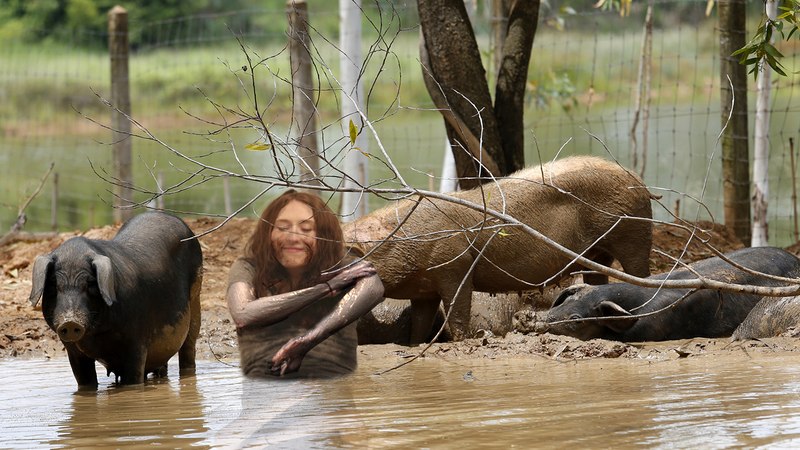 You can’t go to any website or watch any TV show without being bombarded by pro-choice propaganda. Flip on any news program, and it’s obvious that the effort the mainstream media is putting into hocking the right-to-choose rhetoric is outmatched only by its determination to suppress any semblance of a counterargument. And here’s proof: I’m so confident that the phony liberal media won’t publish this pro-life article that I’ll go ahead and use it to store all my embarrassing photos of me bathing in hog slop.

After all, why not? With nothing here for any lefty snowflake to scribble on a protest sign, I may as well be tossing this one into a campfire:

It doesn’t matter how many times I point out that fetuses can show brain activity at six weeks, the biased media will never run with this, even with this humiliating picture of me covered in mud in a pig pen. I would be devastated if my friends and family saw this picture of me rubbing dirt and shit on my body like sunscreen, but because I think a zygote’s ability to turn into a human makes it a human, I am certain Huffington Post, or CNN, or any of the other liberal echo chambers won’t touch this with a 10-foot pole.

The stakes for unborn fetuses in this country are high, just as the stakes are high for me if these pictures ever get out, because I am a teacher in a small town and I would be fired immediately and outcast socially if these ever got circulated online. But the second I wrote “Planned Parenthood is orchestrating a private holocaust behind closed doors,” I knew that this picture of me oinking with the other pigs won’t be so much as touched by any blogs or news outlets who only seek to pat themselves on the back for being “progressive.”

I’ll even sweeten the pot further: In the above pic, I paid the farmer an extra $40 if he would put a ribbon around my neck that said “Filthiest Hog In The County,” then I spent four hours rooting around the mud for apple cores.

The abortion issue deserves to be a two-sided conversation, but the corrupt media seems intent on only showing one side. If you think I’m being overdramatic, here’s a picture of me in hog slop holding a sign with my name, address, and phone number on it.

The amount of ridicule and shame I could receive if this picture was picked up by even one news outlet would be life-ruining. Internet trolls could send pizzas with extra bacon to my house at all hours of the day, or someone could spray-paint “Hog Slop Pervert” on the side of my home. However, with how the media treats even the slightest pro-life opinion, I argue that there’s actually no safer place to keep my most sensitive information than this blog post. And to a proudly pro-life woman who also loves covering herself in hog slop then referring to herself as a “hog filth submarine” like me, that is really, really sad.