I Still Don’t Know Who Was In The Mrs. Doubtfire Costume 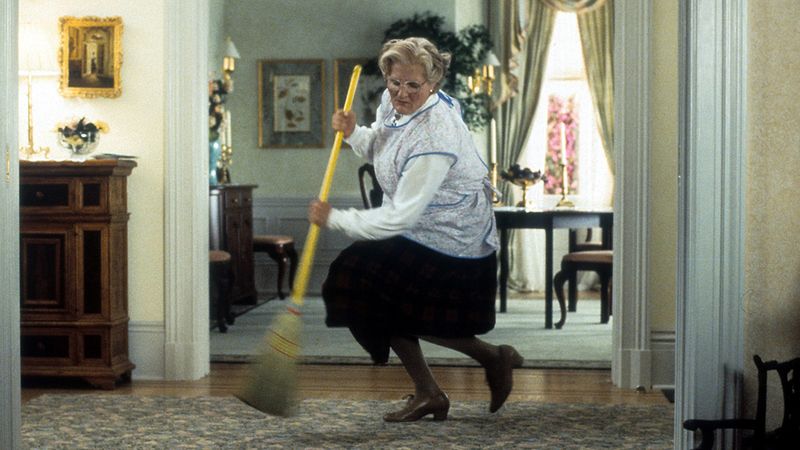 Over 20 years ago, I had the privilege of playing a supporting role in the blockbuster family comedy Mrs. Doubtfire. My character was Stuart Dunmeyer, the suave new boyfriend of Sally Field’s character, and I found myself sharing numerous scenes with the film’s titular character, the large and affable nanny Mrs. Doubtfire. While I spent countless hours around Mrs. Doubtfire on set and grew fond of her hilarious antics, I must admit that I never discovered the identity of the performer beneath the costume, and I still haven’t to this day.

It’s something I’ve dwelled on regularly for the past two decades. Who was the woman behind Mrs. Euphegenia Doubtfire? Why hasn’t she been in anything else? And how, during a shooting period in which we spent months around each other, did she manage to reveal so very little about herself? It’s a strange—and in some ways disturbing—dynamic. I had such a lovely time in her company and trusted her so much as a performer, yet I never had any clue as to who she was.

I gathered from her thick, exuberant accent that she was of Scottish nationality, and I could tell from the way she carried herself that she was likely in her late 60s or early 70s during filming. But I know very little beyond that, despite the fact that I spent so much time in her company, constantly awestruck by her brilliant, heartfelt performance. It’s a tragedy that an actress of such nuance and vigor should be veiled in anonymity. This woman deserves to be celebrated!

…I remember turning to Robin, pointing to the screen, and saying, “Robin, perhaps I’m naïve for not having figured this out yet, but who in the hell is the actress in that costume?”

At the film’s premiere, I remember looking around and being shocked that she wasn’t there. Here we all were getting to enjoy the fruits of our labor, and the woman who played Euphegenia was nowhere in sight. When we were in the theater, I remember turning to Robin, pointing to the screen, and saying, “Robin, perhaps I’m naïve for not having figured this out yet, but who in the hell is the actress in that costume?” He sort of laughed and shook his head, but he didn’t say anything. Thinking about his response recently, I suddenly had a nagging suspicion that he might have known more than he was letting on.

So, I called him yesterday to properly query him on the matter, but someone else answered the phone and relayed some horrible news. Friends, it saddens me to report that Robin Williams has passed away. This is a devastating loss, not just for the acting community but for America as a whole. He was a truly singular talent, and I am beyond heartbroken. Rest in peace, Robin. You will be missed.

One more item I’d like to discuss, however: While Mrs. Doubtfire was always praised for being so kind and warm with the children, I’ve long suspected that there was something a little bit devious about her. In the poolside scene, you may recall a moment where someone throws a lime at my head and Mrs. Doubtfire blames it on a mysterious culprit, claiming it was a “run-by fruiting.” Really? A run-by fruiting? Something tells me she knew exactly who it was—and she may have even been complicit.

Of course, I realize now that we may never learn the truth about Mrs. Doubtfire. And that’s okay. But still, how splendid it would be if the actress were to finally reveal herself to the world, if only just to make us laugh one more time.