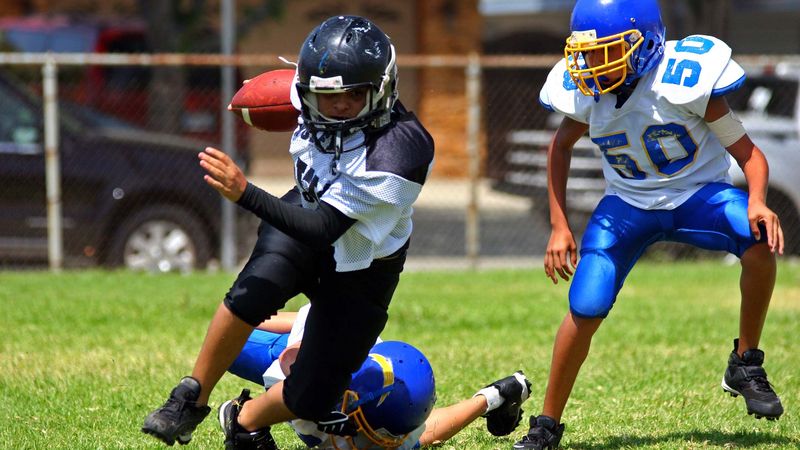 All my life, I’ve loved football. Some of my fondest memories growing up involved seeing my dad rooting for me on the sidelines at my Pop Warner games, and for many years, I dreamed of having a son of my own who would make me proud on the football field. But recently, I’ve become more and more aware of the grave risks that come with playing such a violent game, and now that I finally do have a young son, the dreams I once had for him have become harder to justify. Hence, I’ve decided that I can’t in good conscience allow him to play football, as the dangers of him hitting his head and getting transported back to King Arthur’s court are just too great.

I’m sure there are many people out there who will accuse me of being overprotective. But the reality is that the game of football is faster and more physical than ever before, and I can no longer rationalize involving my child in something where, at any moment, a helmet-to-helmet blow could transport him through a wormhole of flashing lights and cuckoo clocks and to the Arthurian kingdom of lore. I wince when I imagine him waking in a panic and asking, “Where am I? What year is it?” to which a passing peasant pushing a wooden cart would reply, “Why, you’re in sixth-century England, sir.” It’s something no parent ever wants to happen.

People might argue that football instills young boys with the values of hard work and leadership, but these benefits cannot compensate for the danger of suddenly regaining consciousness and finding yourself staring down the end of Sir Lancelot’s sword while he barks, “Who are you? A warlock? An enemy knight?” While you would hope that your child would have the wits to pull out a piece of modern technology and convince his interrogator that he’s a god from the future, you must realize that this might not be his first instinct—especially if he’s still woozy from being steamrolled by a linebacker.

…I can no longer rationalize involving my child in something where, at any moment, a helmet-to-helmet blow could transport him through a wormhole of flashing lights and cuckoo clocks and to the Arthurian kingdom of lore.

The truth is, no matter how careful you are, and no matter how many safety precautions are taken on the field, your child will still be subjected to dozens of high-velocity collisions each game, making it only a matter of time before he is teleported centuries into the literary past. You’ll do your best to protect your kid, but how long before he’s standing before an advancing mob of fearful townspeople, where the only thing that might save him is if he can somehow conjure a solar eclipse or make them boogie by playing rock and roll?

Of course, it’s also possible that he might get rescued by a brave knight on horseback who removes his helmet to reveal that he is actually a she—the king’s beautiful, adventurous daughter!—and the two of them fall in love, leaving your child with the difficult decision of whether to stay in Camelot with the girl who has won his heart or return to the future, where he has bullies at school and a big history project due. Deep down, you’d like to think he’d return to the present day and use the lessons he learned from visiting the past to outfox his bullies and get an A+ on his history project, but as a parent, you just never know.

It’s now clearer than ever that playing football can lead to disastrous long-term consequences, and I, for one, am not willing to indulge my love for a game if it means that my son might one day get mistaken for an evil sorcerer by Merlin and challenged to a magic duel. This is a grim reality that parents can no longer ignore, and it’s critical that we put the well-being of our children first.