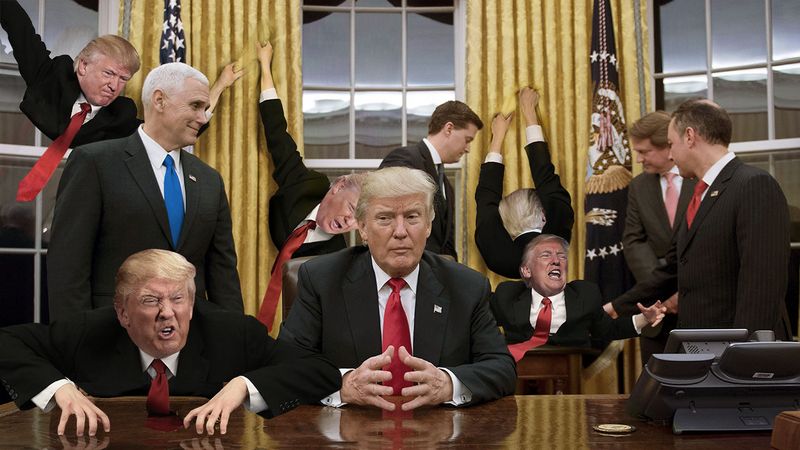 It’s not surprising that Donald Trump has a steep learning curve entering the White House with no experience holding political office, but even his supporters have to admit his latest gaffe is truly inexcusable: Every single one of Donald Trump’s body doubles only has arms and a head.

Yeesh, this is a serious black eye for the administration.

Perhaps the presidential body doubles would look somewhat convincing if they sat in a chair behind a desk, maybe perched on a stack of phone books to raise them up to Trump’s full height. However, they’ve been following Trump everywhere he goes, scuttling across the floor on their hands, and using their teeth to climb curtains in the Oval Office. Considering that the actual Donald Trump has legs and walks, this makes the body doubles even less effective at their job.

It’s deeply concerning that the Trump White House would select body doubles this unqualified, who cannot even speak because they have no lungs, and instead communicate with each other through high-pitched hisses and clicks. The doubles also appear completely untrained to serve on a security detail this important, and immediately abandon Trump whenever they enter a room with uncooked shellfish, which the body doubles eagerly chew to a paste then spit at each other in some form of mating ritual. Although it’s unlikely that Donald Trump personally hired the body doubles, he’s the president now, so the buck stops with him.

Um, yeah. Typically body doubles have these little things called torsos and legs, Mr. President. Ever heard of them?

The body doubles also have what can only be described as a queen, and she is just Trump’s head with no limbs at all. The queen has grown large enough to occupy the entire Rose Garden and spawns a new head-and-arms-only Trump body double through her mouth about every 17 minutes. You can expect an adjustment period for any new president, but making such an obvious misstep straight out of the gate doesn’t look good.

So far Trump shows no signs of changing course, and dozens of the body doubles continue to cling to the exterior of his presidential limo or helicopter every time he leaves the White House. Several unnamed senior White House officials have also reported overhearing Donald Trump giving serious thought to severing his own body below his clavicle so that he matches his doubles. In standard Trump fashion, it seems that the leader of the free world would rather do anything than admit it was a mistake to have body doubles with only the upper fifth of his body.

Considering that Trump campaigned on a platform of security, it’s astounding that he would do such a poor job of protecting himself. For those praying that Trump shapes up into a capable leader, being protected by heads with arms is a troubling choice that does not bode well for the next four years.

Let’s hope he proves us wrong.