Incredibly Generous: Regis Philbin Visited This Sex Ed Class And Told The Students That Vultures Would Eat Him Alive If Any Of Them Had Sex Before Marriage 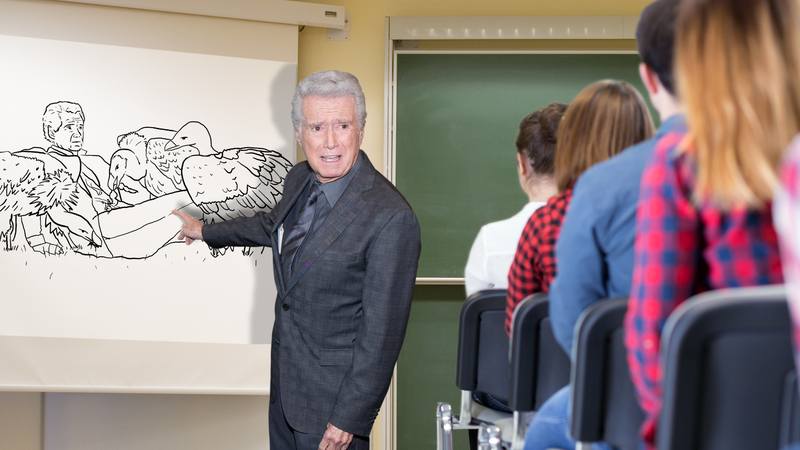 Well, it turns out that some celebrities stay incredibly kind and generous no matter how famous they get. According to reports from faculty and students at Arlington High School in upstate New York, Regis Philbin visited a sex ed class last week and generously gave the children a lecture about how vultures would eat him alive if any of them had sex before marriage.

Wow! It looks like Regis Philbin isn’t afraid to roll up his sleeves and play a role in educating America’s young people about responsible sex!

According to faculty members who were present for this incredible presentation, Regis stood in front of the entire seventh-grade class and, with tears streaming down his face, told them that if any one of them succumbed to sexual temptation before getting married, then the cruel vultures that watch his every move would quickly descend upon him and devour him alive while he screamed for mercy that would not come.

These lucky kids got to spend over five hours with a real-life TV legend while he taught them about the basics of sex education and the ways in which the vultures would eat him if they had intercourse with each other before marriage. Regis’ lesson included an impassioned speech about how, if any of the children have premarital sex even one time, the vultures will find him wherever he is and they will eat him alive while making eye contact with his screaming face.

It’s incredibly inspiring to see a celebrity take time out of his busy schedule to help shape the lives of our nation’s students!

“Listen, you kids are going to have sexual urges, and that’s perfectly natural, but if you give into them before marriage, vultures are going to eat me alive,” Regis told the children while pointing out of the window to a swarm of vultures that were perched in a tree right outside the classroom, watching his every move. “You don’t want Regis to die, do you? Stay celibate for sweet Regis, because if any of you has premarital sex even once, then vultures will come out of the sky and devour sweet Regis alive! Please children! Stay virgins until you wed so that sweet Regis doesn’t get eaten by the birds!”

What a beautiful story! Regis Philbin is a perfect example of the kind of celebrity who is willing to give back to his community and invest in educating our nation’s children. If only more celebrities could take time to give back to their communities like this! Hopefully the students take his lessons about premarital sex to heart so that vultures don’t eat him alive!