Incredibly Insensitive: Everyone At This Coffee Shop Is Gawking At A 2-Inch-Tall Man Taking A Bath Inside A Teacup 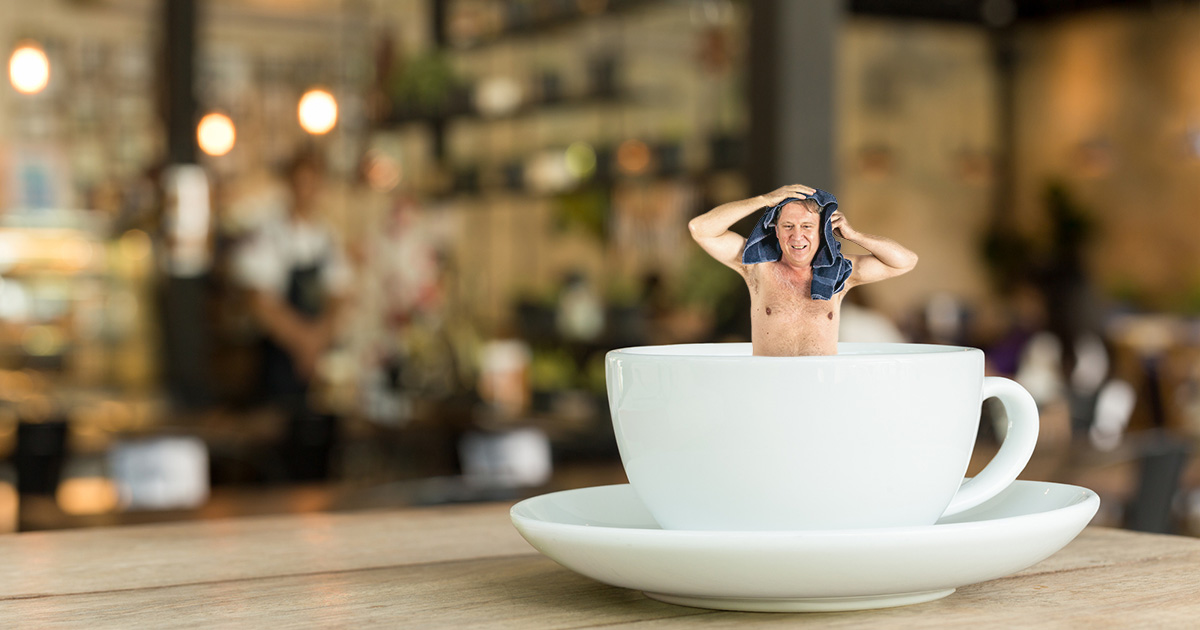 Get ready to lose your faith in humanity, because the infuriating situation going on in a local New Jersey cafe right now is proof positive that people can be incredibly cruel: Everyone at this coffee shop is gawking at a two-inch tall man taking a bath inside a teacup.

How unbelievably insensitive. It’s not okay to stare at someone just because they’re different!

Alistair Cabot, a two-inch tall, 54-year-old customer at the Coffee Box in Plainfield, NJ, has been minding his own business all morning, bothering no one as he bathes himself inside a tiny porcelain teacup placed on one of the cafe’s corner tables. Sadly, however, all the patrons and employees at the Coffee Box can’t seem to stop themselves from staring at Alistair as he scrubs his naked body with a loofah made from a toothpick and a cork, muttering among themselves as if he isn’t totally within earshot of all their rude comments.

When Alistair first noticed he was being ogled by no less than a dozen onlookers, he cleared his throat and stared unapologetically back, standing his ground as he raised a hand in the air and used his tiny bar of soap to scrub his underarm. As the impolite staring continued, Alastair briefly considered drying himself off and ending bath time early to avoid the judgmental glares, but ultimately he carried on exfoliating his tiny legs with a thimbleful of coffee grounds despite his audience’s perplexed looks. Unfortunately, the gaping only became more pronounced as Alastair went on with his bath, and as of 30 minutes into his morning bath ritual, everyone is still treating him as if he’s some sort of sideshow attraction instead of a pocket-sized human being simply cleaning his body in a cozy little teacup filled to the brim with soapy water.

After Alastair finished washing his hair, it appeared that he had had enough of the coffee shop patrons treating him as some sort of spectacle. “Take a picture, it’ll last longer,” Alistair bravely barked at a parent and child who were peering at him while waiting in line, standing up from the suds and raising his arms to present his whole tiny body in a defiant gesture of pride. “What? You’ve never seen a two-inch tall man take a bath before? Grow up.”

Good on Alastair! Who the hell are these people to shame him? So disrespectful.

Clearly, these spectators were too thoughtless to consider that Alistair’s size would prohibit him from bathing in a normal-sized tub, and that a teacup might be the perfect alternative vessel for his needs. Would they prefer that he remain covered in chimney soot just so they don’t have to feel ‘inconvenienced’ by the mere sight of a man the size of a field mouse taking a bath? To see someone like Alistair—whose only crime was maintaining basic hygiene while humming a cheerful ballad from the early 1900s—met with such cruel incivility from this cafe’s patrons is downright rage-inducing.

No near-microscopic man should be worried about taking a teacup bath in public. It’s always disheartening to see people lack such basic decency, but luckily, Alistair is courageously sending a message to all of his onlookers that their impolite gawking won’t stop him from enjoying his bath, as he is 100% entitled to do. Don’t let them get you down, Mr. Cabot!