Incredibly Sad: Jeff Bezos Just Started Wearing One Of Those Witch Hats With Gray Hair Coming Down The Sides And Formally Announced That He Is No Longer Bald 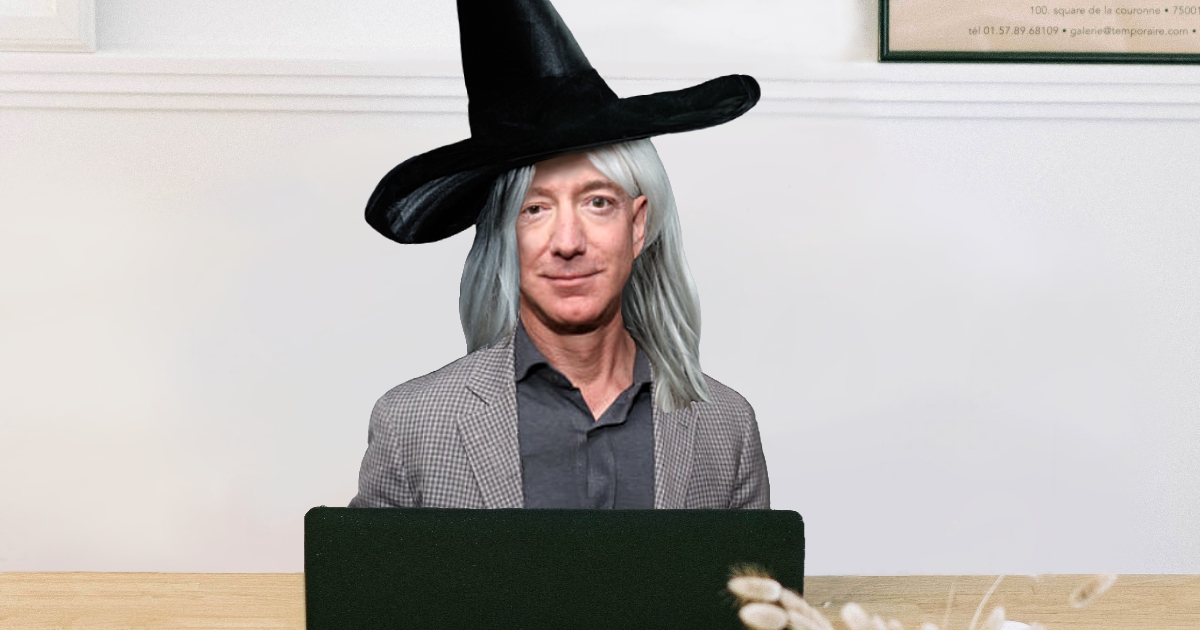 Jeff Bezos may be one of the richest people of all time, but it’s clear that he still suffers from some painful insecurities despite his wealth, as evidenced by the embarrassing public display he made recently: the Amazon CEO just started wearing one of those witch hats with the gray hair coming down the sides and formally announced that he is no longer bald.

Yikes. This is hard to watch.

This morning, Bezos released a video announcement filmed in his living room, in which he was wearing what was clearly a witch’s hat from Party City, which had stringy, synthetic gray hair attached to the sides that cascaded down to Bezos’ shoulders in frizzy-looking clumps. Viewers could clearly see the awkward crease from where the hat-wig hybrid was folded in its original plastic packaging as Bezos began his message, which he appeared overjoyed to deliver.

“Hello, America. I have an important message from Amazon.com, Inc. to share with you. Some of you may know that I was bald for many years, but I am happy to announce that that is no longer the case: this morning I bolted awake at 5:00 am to find that I had a head full of long, healthy locks,” he said. “Whether this was the result of a miracle from God or simply my healthy lifestyle, I can’t say — all I know is that I just took a shower and washed my gorgeous, abundant hair with a whole bottle of shampoo, and I’ve never felt better.”

God, this is sad. We all know that’s not real hair, Jeff. Please just give it up.

“I may have been one of the richest men alive before, but I am now also one of the sexiest,” Bezos went on. “If you thought of me as an old, bald CEO before, you won’t any longer, because as you can see, I have overcome baldness completely. I have so much hair now that my ex wife has been on my lawn all day, banging on the front door and begging me to take her back. But I won’t do it — from now on, I will only be dating international supermodels, because I have been blessed with the kind of lush mane that would bring any man to his knees with envy. Now, if you’ll excuse me, I need to go put my hair in a ponytail so I can go to the gym.”

Wow. What a depressing sight. It looks like Jeff Bezos really thinks he’s pulling one over on everybody, but that couldn’t be further from the truth. We can all tell you’re wearing a cheap witch costume, Jeff.  Here’s hoping Bezos ends this charade sooner rather than later, because it’s seriously bumming us out.