Innovation FTW! Toyota Is Printing Dick Van Dyke’s Face On Their Airbags So That If You Get In An Accident It Looks Like Dick Van Dyke Is Bursting Out Of Your Steering Wheel To Kiss You 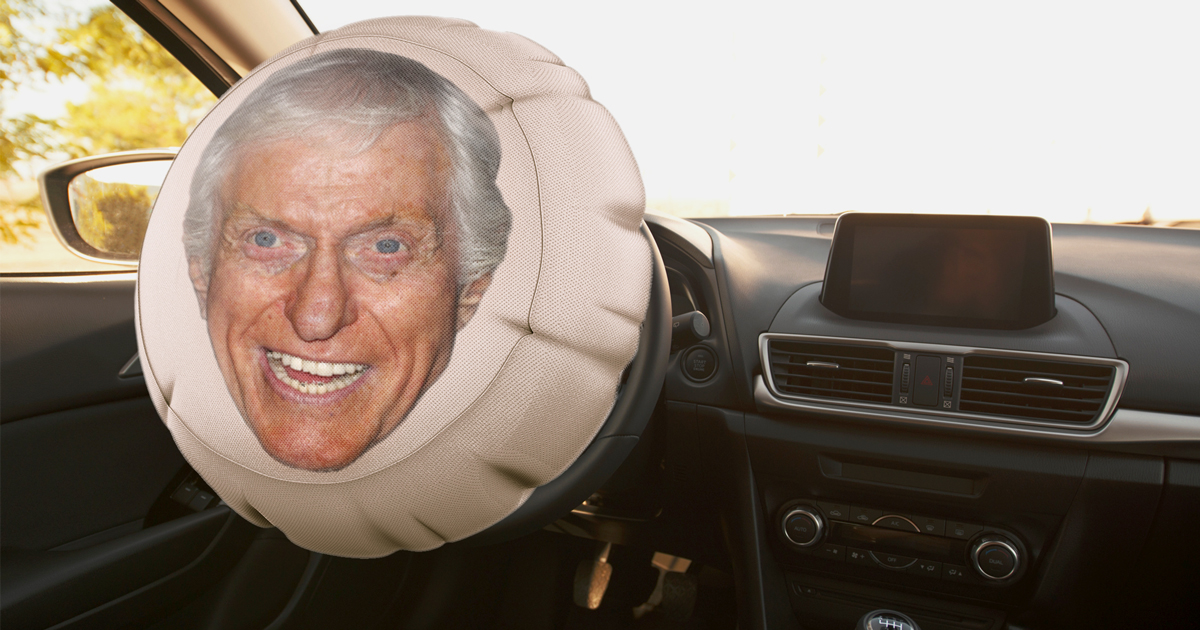 The No. 1 most important thing to look for when buying a new car is safety, and one automotive manufacturer just unveiled an innovative new safety feature that’s guaranteed to give you peace of mind every time you get behind the wheel: Toyota will begin printing Dick Van Dyke’s face on its airbags so it looks like he is bursting out of your steering wheel to kiss you when you get into an accident.

In a press release earlier today, the company announced that every new Toyota model will now come equipped with NHTSA-certified airbags embossed with a lifelike digital print of Dick Van Dyke’s face contorted into a comforting, wide-eyed grin. In the event of a collision, Toyota boasts that the airbags will not only greatly reduce the risk of head and neck injury, but they’ll also give the flattering impression that a 95-year-old Emmy winner and World War II veteran desperately wishes to kiss you, thereby distracting you from the terror of the accident and whatever gruesome injuries you may have suffered.

“Our industry-leading team at the Toyota Research Institute devoted over five years and $250 million towards developing this revolutionary new technology, allowing motorists to hit the road for the first time ever with the assurance that the elderly star of Chitty Chitty Bang Bang could burst out of the steering column and smooch them at any time,” said the press release. “The airbags will come synced with Toyota’s industry-leading impact-detection technology, offering additional protection to drivers by alerting them to imminent collisions via a recording of Van Dyke screaming ‘GET READY, JACKASS, BECAUSE I AM GOING TO KISS YOU!’ taken from a 1979 Tonight Show interview with Johnny Carson.”

To promote the feature, Toyota has rolled out a powerful new commercial in which we see a 16-year-old girl going for a drive in her new Toyota while we hear a voiceover from her father reflecting on the challenges of letting one’s child grow up and become independent while still wanting to protect them, at which point we suddenly see his daughter get into a terrible collision. We then see harrowing slow-mo footage of the airbag erupting out of the steering wheel and Dick Van Dyke’s ancient, rapidly inflating face rocketing forth to plant a big ol’ wet one on the child as she ragdolls from the collision, after which we then cut back to the father, who lets out a big sigh of relief and says, “While she’ll always be my little girl, I can at least take comfort knowing that wherever the road takes her in life, a nearly 100-year-old celebrity will always be there to kiss her when she needs it most.”

Wow…we are definitely getting a little misty-eyed over here!

Kudos to Toyota for putting consumers’ safety first. Here’s hoping that other car manufacturers follow suit with smooch-deploying airbags of their own!