Internet FTW: Someone Photoshopped A Gazelle Next To Donald Trump, And It’s Going Viral Under The Assumption That It Takes Him Down In Some Way 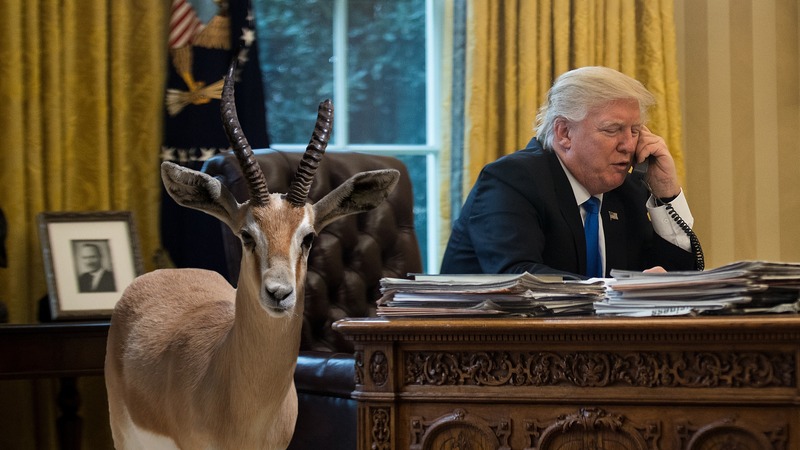 Congress may not be challenging President Trump’s policies, but the internet just proved it is not afraid to stand up to fight a president it sees as corrupt and dangerous: Someone photoshopped Donald Trump next to a gazelle, and it’s going super viral under the assumption that it’s some sort of epic takedown of the president.

So much yes, presumably!

Liberals may have four years of Trump to stomach, but it’s brilliant acts of resistance like this gazelle photoshop, which you just have to figure is doing something to take Donald Trump down a few pegs, that provide a few bright spots.

Here’s the tweet that got what certainly appears to be a scintillating Trump burn session going:

Immediately, the image got a massive response from people who just assumed the photo was making brilliant social commentary of some kind.

Does it compare Trump to a wild animal? Is it a brutal caricature of Steve Bannon? Or maybe it’s smarter and more clever than even those things? Whatever is going on here, it’s almost certainly a devastating burn that points out Donald Trump’s insecurities and skewers his self-centeredness.

People have even been making their own memes based on the original, and each one is just as epic as the last. There’s definitely some sort of point that’s being made by putting Donald Trump next to a gazelle, and whatever that point is, these pics are totally nailing it.

Hell yeah. You’ve got to admit that this is a master class in trolling. Mr. President, you’ve officially been owned.