Invaluable Sex Education: This Quora Post From 2011 Explains Why It’s Not Likely That You Would Get Pregnant From ‘Him Druy Hump My LEg N Sat In Wet But Left Pantys On’ 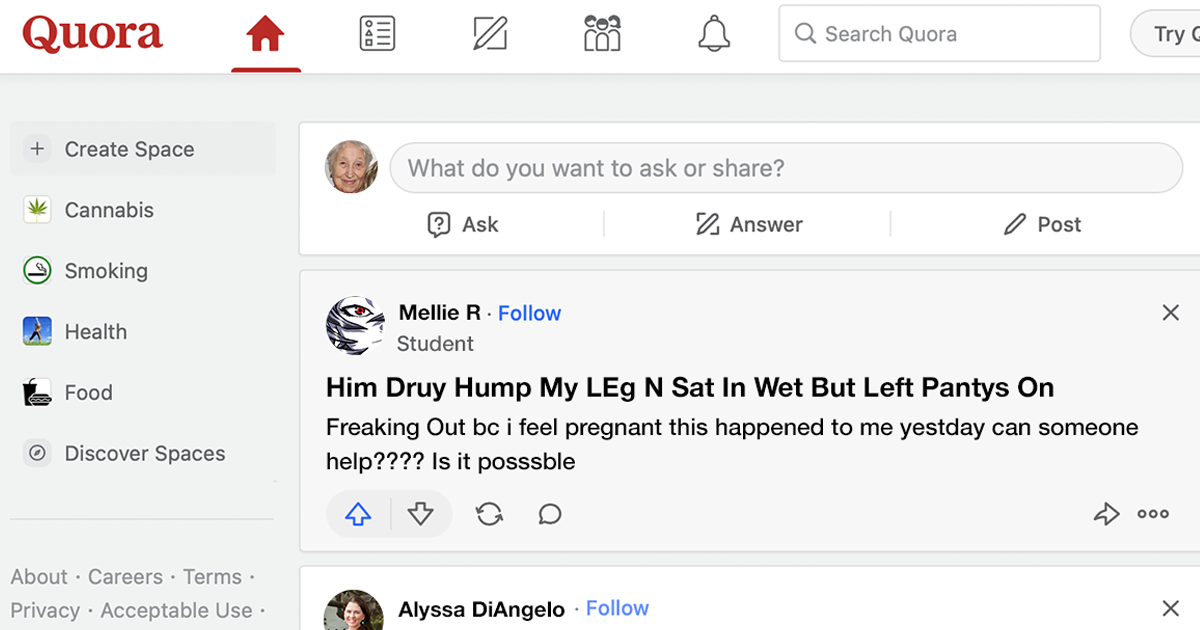 While sex education remains dismal in our schools with the prevalence of abstinence-only curriculum or other shame-based teachings, thankfully there are plenty of online resources available to teenagers in need of answers. Take for instance this Quora post from 2011 that helpfully explains why it’s not likely that you would get pregnant from “Him Druy Hump My LEg N Sat In Wet But Left Pantys On”.

Awesome! This definitely goes a long way to teach teens about the real risks of pregnancy.

In October of 2011, a Quora user took to the Q&A site to ask the question, “Him Druy Hump My LEg N Sat In Wet But Left Pantys On,.. Am pregant????” and in a demonstration of just how awesome the internet can be, several kind strangers wrote some thoughtful, informative responses. As outlined in the top reply from a Quora user named Trish Adler whose occupation is listed as a former hairdresser, “In order for pregnancy to occur, sperm must meet up with an egg. The odds of a pregnancy happening from dry humping is nearly impossible due to the barriers of clothing the sperm will have to travel through to get to the egg.” Although another user replied, “You are deffff preggo. This is how my girl got preggers,” a response from Sarah Demartis, who describes herself as a “Liberal Democrat, Atheist, Corporate Finance PHD Candidate,” further explains that the risk depends on what the “wet” substance was. “If by wet you mean cum then yes, but if it’s just jizz/semen then no, you are not pregnant,” she wrote. “If you become pregnant, take a pregnancy test to see the baby, but if he just dry humped your leg instead of using semen in his sexual project with you, then a baby cannot happen that way because of Darwin,” she continued.

There you have it! It looks like getting pregnant from “Druy Hump My LEg” is pretty unlikely after all.

Later on in the comments, a user with no photo named “Bernnrt” added, “This jus happen to me!!! My bf wasa fingerng me+dry hump even thogh panties on . 3 days later, now I hav mornig sickeness FREAKING OUT!!!! HELP!!!!” to which Daniel Lightmarsh, an Emergency Room Technician, kindly replied, “Even if you somehow conceived a baby from that, you would not be pregnant already. It seems as though you do not understand how pregnancy works, which suggests that both you and your partner are not ready for sex.” Daniel then went on to explain that as a passionate lover who has satisfied more than 300 women, he knows firsthand what does and does not get someone pregnant, before detailing what he called his “10 Commandments For Pleasuring A Woman.”

Wow! Thanks to the Quora community for providing such useful insights. Posts like this definitely make a huge difference when it comes to sex education! It’s so awesome to know that the internet is full of such amazing people willing to help out a stranger in search of answers!