It’s Theirs Now: Dozens Of Bikers Showed Up To The Capitol Building And Now It’s A Biker Congress 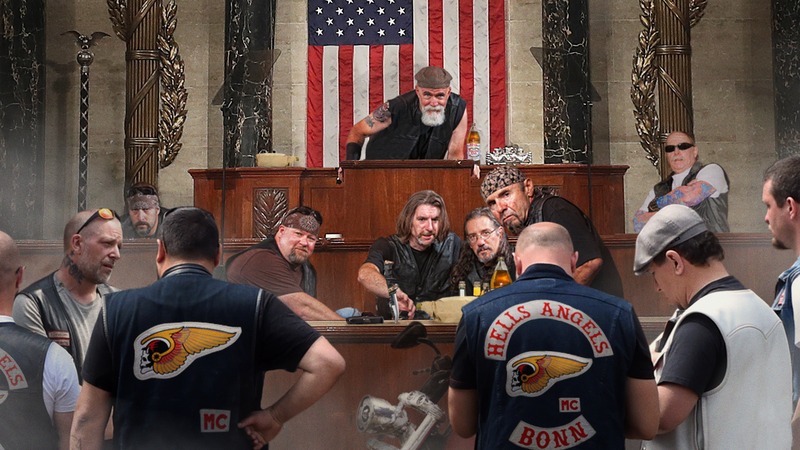 It’s not uncommon to see abrupt changes in Washington, but it looks like Congress was just dealt a curveball that may take a while to adjust to: Dozens of bikers have shown up to the Capitol Building, and now it’s a biker Congress.

Well, that happened fast. It looks like the Capitol belongs to bikers now.

The phenomenon began last Monday, when, during a routine legislative debate between congressmen, a handful of bikers wandered into the Capitol and made their way to the far corner of the main floor, just drinking Coors Banquets and kind of shooting the shit. While the elected members of the legislative branch initially wrote off the bikers’ presence as a weird, one-time occurrence, more and more motorcyclists began shuffling into the Capitol as the week went on, and by the end of the week, the Capitol Building was transformed into a full-blown biker spot.

What began with a few motorcyclists smoking cigarettes on the front steps and talking shop about their hogs has become an all-out cultural takeover, as dozens of bandana-clad riders now filter in and out of the Capitol on a daily basis. Whether they’re playing Motörhead from a Harley they parked on the Congress floor, throwing darts at the wall by the main entrance, or carrying custom pool sticks they brought from home up and down the Capitol’s halls, one thing has become clear: The bikers are making themselves right at home, and there’s not much Congress can do about it.

“We’ve never had a lot of bikers around here before, so it’s definitely weird that they all just decided that this is where they’re going to hang out now,” said David Loebsack (D-Iowa). “I mean, when it was just a few of them, I didn’t really notice them that much. But now that it’s totally packed out with bikers, it feels like they kind of run the place. The culture in the Capitol Building has entirely changed. It’s all biker stuff now.”

“Whenever I go in there now, all the bikers completely stop what they’re doing and just stare at me, and it’s just so uncomfortable,” he added. “The Capitol used to have this normal, laid-back vibe, but now it feels like a fight could break out any second, and it sucks.”

The bikers have reportedly wasted no time in getting comfortable in the Capitol. Sporting a variety of leather and denim along with faded tattoos of mostly sirens or jaguars, the motorcyclists have been ashing their cigarettes right onto the Congress floor, comparing hunting knives near the bathrooms and playing what appears to be high-stakes games of poker on a number of representatives’ desks. Having already draped a motorcycle club flag portraying some sort of skull with wings over the Capitol’s front doors, it doesn’t look like the bikers plan on leaving anytime soon.

“We thought we could just ignore them at first, but it’s become clear that we’re going to have to find a new place to conduct our work,” said Senate Majority Leader Mitch McConnell (R-Kentucky). “We all really liked it at the Capitol, too, so now that the bikers are just claiming it, we’re all pretty bummed. I went in there yesterday, and they had installed their own jukebox. I don’t really think I can go back there. It just feels weird now. The Senate floor is a biker place now, you know?”

Yeesh. The bikers sure seem to be comfortable at the Capitol now, and it looks like Congress may be fresh out of options. Here’s to hoping that Congress can find a new place to meet that isn’t overrun by bikers and get back to work soon!