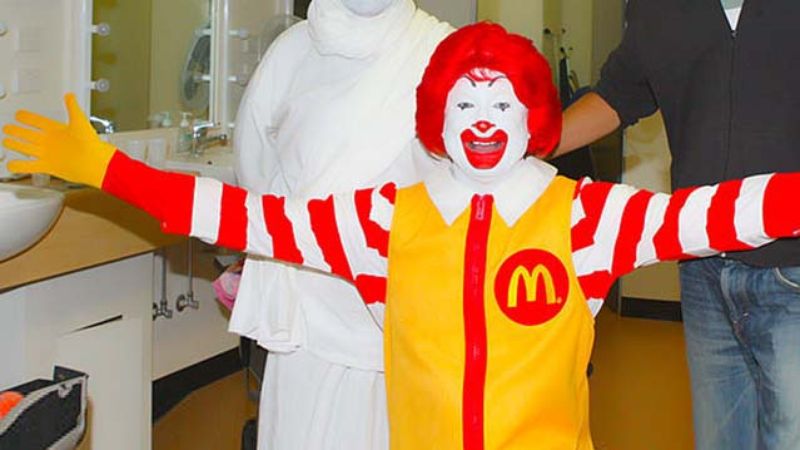 I was driving back from a day of apple picking my niece and nephew (8 and 5) in the back seat when we passed an all-too-familiar pair of golden arches. The next thing I know, the 8-year-old (Madeline) asked if we could stop for a “happy” meal.

I nearly drove us into a pole. I realized that not even my own family was immune to the inundation of corporate brainwashing machine taking advantage of impressionable children—and I know exactly who’s to blame.

America, the time has come to publicly execute Ronald McDonald.

The longtime McDonald’s spokesclown is everything wrong with child-targeted marketing crammed into one yellow jumpsuit and the damage he has already done to our society is immeasurable. It is not enough to simply retire this character from appearing in advertisements. He must be ritualistically killed, in plain view for our children and the rest of America to see. The fact is: Seeing Ronald McDonald get hanged, drawn, and quartered on primetime television could save up to 1.5 million children from Type 2 diabetes.

It is the only way to truly regain the ground in our kids’ hearts and psyches lost by decades of hyper-focused advertising. It doesn’t matter whether Ronald McDonald is shot by a firing squad, stabbed repeatedly in the chest, or hanged from the top of a McDonald’s Play Place, as long as his slow and painful death is seen on every television screen and iPad in America.

Seeing Ronald McDonald get hanged, drawn, and quartered on primetime television could save up to 1.5 million children from Type 2 diabetes.

The counter-argument is always the same: Is it not ultimately the parents’ responsibility what food and media their children consume? Of course the answer is yes. But between a full-time job and other household duties, the only way a parent can guarantee their child’s health in today’s America is ensuring this clown is stripped of all dignity, forced to plead for his life, and then brutally executed without mercy.

Every second that we wait, we gamble with the wellbeing of future generations. The next time our children see Ronald McDonald on television, he should be drawn and quartered in a McDonald’s parking lot, his white chest split open allowing his insides to spill freely onto the asphalt as his fellow merchants of death—Grimace, The Hamburglar, and Mayor McCheese—watch in tearful horror at the fate that awaits them.

It’s not even an argument. Whether sheared in half in a lumber mill, boiled in acid, or bolted by his palms to a brick wall with children (perhaps a contest could be held) holding torches against his skin and clothing, Ronald McDonald die.

It’s the responsible thing to do.