It Started Sweet, At Least: Tom Hanks Randomly Showed Up To This Couple’s Wedding In Central Park But He’s Been Slow Dancing With The Bride For Like 45 Minutes Now 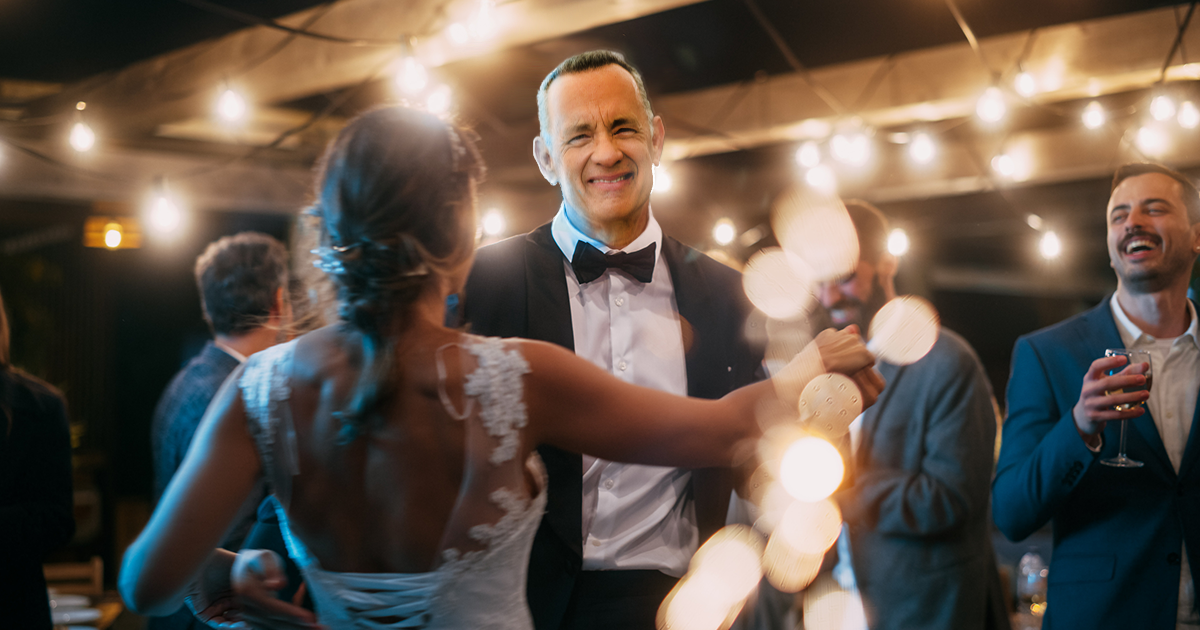 One lucky couple got the wedding gift of a lifetime when a beloved actor made a surprise appearance at their reception earlier tonight, which makes it all the more unfortunate that their celebrity guest seems to be having some trouble taking the hint that it’s time to leave: Tom Hanks randomly showed up to this couple’s wedding in Central Park but he’s been slow dancing with the bride for like 45 minutes now.

Newlyweds Peter and Maggie Donovan had just started their first dance together when Tom Hanks decided to crash their wedding after he stumbled upon their reception in the park. Every guest excitedly pulled out their phone to film the Hollywood superstar as he tapped the groom on the shoulder and asked if he, too, could have a dance with the bride, and Maggie had a grin of total glee and surprise on her face as he dramatically dipped her to laughs from the crowd—but after the band segued out of Coldplay’s “Yellow” and into “Uptown Funk” so all the guests could hit the floor and party with Tom Hanks, Tom just kept on slowly waltzing the bride around the tent like the song hadn’t even changed.

Hm. Kinda seems like he should have bowed out after one song at the very most, right?

A couple minutes later, the groom’s grandmother used her walker to approach Tom and ask if he would dance with her, to which Tom smiled and said, “You bet I will,” leading partygoers to believe that the wedding might continue normally—unfortunately, however, that was over 30 minutes ago, and Tom Hanks is currently still leading the increasingly confused bride around the dance floor and making no sign that he plans to relinquish he. The groom has even tried asking for his wife back from Tom Hanks a couple of times now, but every time he gets close, Tom Hanks just says something like, “You’re such a lucky guy!” or “What a beautiful new wife you have!” and, tragically, it feels so good to get a compliment from the real Tom Hanks that the groom just gives Tom another 10 minutes.

Woof. It’s fine if you want to stay at the wedding, Tom, but you gotta give the slow dancing a rest.

In a ploy to release herself from Tom’s grasp, the bride announced at one point that she’d like to cut the wedding cake, but that just resulted in a scenario in which her husband cut the three-tiered cake by himself while she and Tom Hanks fox-trotted to “I Gotta Feeling” right beside him. The other guests are clearly getting pretty annoyed with the situation, too, because anytime they ask Tom for an autograph or a selfie he just says he’ll get to them later, and everyone’s beginning to agree that “later” may never come.

Yikes. There’s nothing more fun than an unexpected encounter with Tom Hanks, but this one seems to have gone a bit too far. Fingers crossed he has some fancy Michelin star dinner he needs to head out for, because everyone at the wedding has definitely had enough of him by now.