Leaving His Mark: Barack Obama Has Nailed One Of His Shoes To The White House Wall So That Nobody Will Forget Him 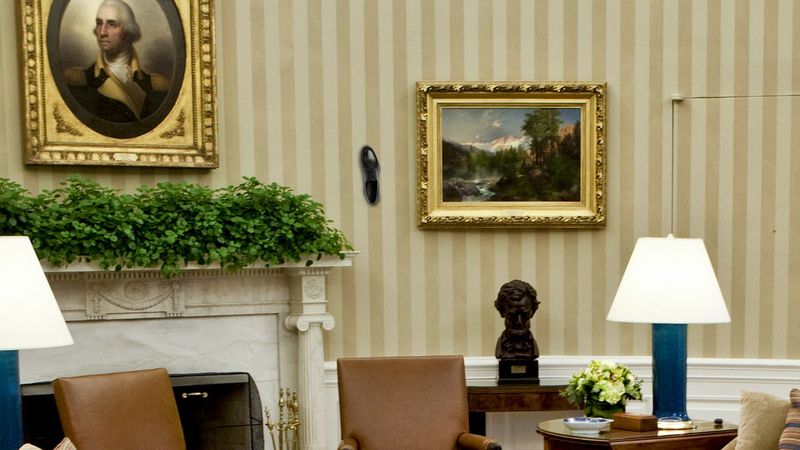 With the end of his second term drawing near, Barack Obama looks determined to cement his legacy and ensure his presidency will be remembered for centuries to come. Today, on one of his last days in office, our outgoing president left a final, indelible mark on history when he took off one of his shoes and nailed it straight into the White House wall.

Awesome. What a way for the 44th president of the United States to go out!

Tourists and diplomats alike witnessed the historic event just after 10 this morning, when Obama burst through the Oval Office doors, walked swiftly into the East Wing, removed his right shoe, slammed it against a blank wall, and started furiously hammering a nail into the sole until it was firmly fastened to the wall. After testing its strength by unsuccessfully pulling the base away from the wall, Obama then took a step back, cocked his head to the side, and confidently nodded to himself before returning to his office, wearing only one shoe.

While Obama is understandably worried about losing his legacy, nailing this size 11 Doc Marten into the wall at least gives him some certainty that his eight years here will never be forgotten. This nail-riddled footwear smashed proudly next to a row of presidential portraits will serve as a permanent testament to Obama the man, and to his achievements as president.

Presidents may come and go, but hundreds of years from now, this shoe will remain on the White House wall. With this simple act, Barack Obama just made sure his presence will always be felt here in the historic halls of the White House!