Legendary Collaboration: The Kid Who Plays ‘Runes: The Card Game’ And The Kid Who Eats Orange Peels Are Sitting Together In The Library 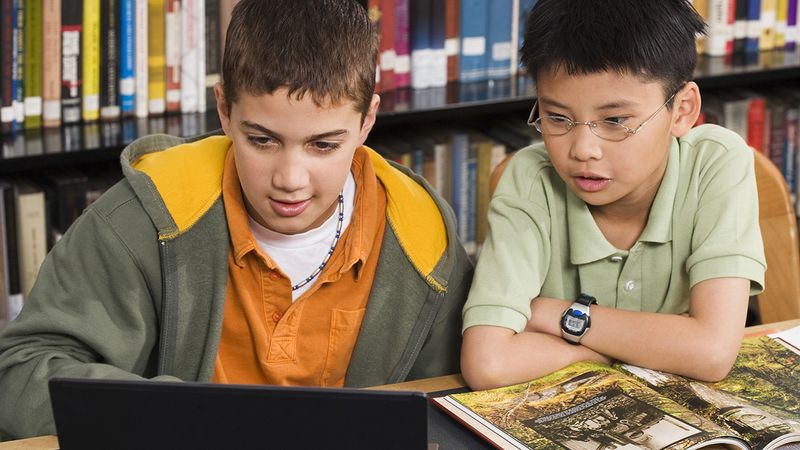 Folks, this is not a test. We have what could very well be a Simon & Garfunkel-level pairing on our hands here. The kid who plays Runes: The Card Game and the kid who eats orange peels are sitting together in the library.

This is HUGE. What could those two be up to?

So far, it seems like they’ve secured two seats at the table in the back of the reading area far away from anyone else, and they’re really taking their time with an Eyewitness Book about reptiles. The kid who plays Runes seems to be steering the ship in terms of page-turning, while the kid who eats orange peels is doing a lot of pointing and whispering. Both of them are chewing on their sweatshirt drawstrings, and one of the Runes kid’s sandals is on the table for some reason, along with what appears to be an encyclopedia of Tintin that they haven’t even cracked yet. And lunch just started. From the looks of it, they’re in it for the long haul.

How did we not see this incredible partnership coming? They work so well together, even though they don’t usually hang out. This could be a duo for the ages.

Here’s a running list of everything we know about the food situation with these two:

They appear to be sharing a little baggie of loose pepperonis that the kid who eats orange peels brought from home.

The pepperonis are moist, and the baggie—which is one of those ones that doesn’t zip closed but just sort of folds over at the top—is foggy with condensation.

The kid who plays Runes is doing a thing where he eats the pepperonis from the inside out until he’s left with a hollow circle of pepperoni rind, and then he throws that in the trash.

The kid who eats orange peels is very slowly nibbling at a single pepperoni that he poked his finger through and is wearing like a ring.

They are sharing a Fresca!

This is shaping up to be an all-time-great meeting of minds.

The kid who plays Runes even appears to have added a brand-new element to the mix by taking out some graphing paper and a mechanical pencil and tracing one of the lizards in the book! The kid who eats orange peels has joined in as well, after first going up to the librarian, calling her by her first name—which is apparently “Sarah”—and asking her if he can borrow some colored pencils. She obliged, and now this already-iconic pairing has begun the task of tracing all the reptiles in the book and labeling them with stats like “runs fast,” “can shed tail,” and “dinosaur blood.”

Wow. Could this be the beginning of a beautiful friendship? We can’t wait to see what comes out of this legendary collaboration. Maybe a composition book labeled “Lizard Journal (PRIVATE)” or a Trapper Keeper absolutely stuffed with indecipherable journal entries written on wide-ruled paper in a made-up language? It’s still too early to tell, but whatever it is, it’s sure to be absolutely epic.