Life In Shadows: A Cloaked Merrick Garland Is Crouched In The SCOTUS Rafters Whispering A Dissenting Opinion And Clutching A Withered Rose 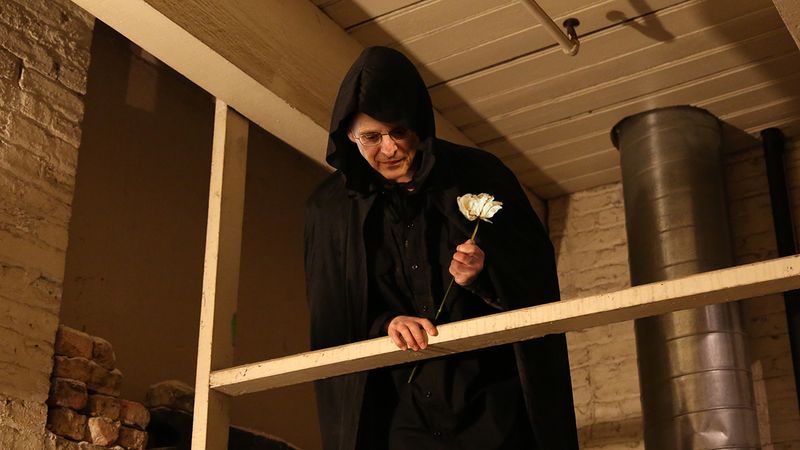 The GOP may have shut down Merrick Garland’s nomination, but it seems they haven’t kept him from reaching the highest court in the land. According to witnesses, Judge Garland has been spotted skulking in the rafters of the Supreme Court of the United States, whispering his dissents to himself and clutching a withered rose to his breast.

Wow. An unconfirmed Merrick Garland lurking around the court’s crawlspace shows just how little precedent there is for the past year of political maneuvers surrounding vacant Supreme Court seats.

Courthouse employees have reported catching eerie glimpses of a hooded Garland observing oral arguments while perched atop a marble pillar, and at night hearing a haunting voice forlornly citing judicial precedents. One evening after hours, a bailiff heard a gavel banging in the supposedly empty courtroom but, when they rushed to check who was there, only found the handwritten text of an insightful legal ruling clarifying water usage rights for lakes whose boundaries extend across state lines.

The justices have also been affected by Garland’s unauthorized residency. Elena Kagan has complained that someone entered her office without permission to leave a single rose and a tear-streaked concurring opinion. In addition to supporting Justice Kagan’s interpretation of allowable police conduct at traffic stops, Garland’s concurrence also included a poem fondly describing the memory of sunlight as a “long lost joy my skin shall never know again.”

Chief Justice John Roberts had an even more harrowing experience when he was chloroformed and woke up chained to a pipe in the Supreme Court’s boiler room, where a masked figure angrily picked apart the logical foundation of Roberts’ decision on an affirmative action case. Then the masked kidnapper chloroformed Justice Roberts a second time and moved him to the court library, leaving a woozy Roberts to wonder whether the entire thing had been a dream.

It’s really inexcusable that the court has been stuck with eight justices for this long, and that Merrick Garland now has a rudimentary dwelling built into the building’s rafters for the unconfirmed judge to peer down upon the proceedings below, tantalizingly close yet infinitely far.

Perhaps the greatest disruption caused by Garland’s secretive inhabitation occurred after Neil Gorsuch was nominated to fill Scalia’s seat, when every mirror in the SCOTUS building was shattered and the complete text of the Marbury V. Madison ruling was scrawled on the courthouse steps in cow’s blood.

However, other than a few incidents like these, Garland mostly lives a quiet and subtle existence, spotted so rarely that most of the court’s law clerks believe that Merrick Garland doesn’t even exist and is merely an old wives’ tale. And Justice Sonia Sotomayor has given guarded praise to Garland, saying that the somber viola music that now echoes through the halls “has a mournful beauty to it.”

This entire spectacle definitely imperils the unbiased reputation of the nation’s highest court, especially after Clarence Thomas and Samuel Alito last night vowed to “end this once and for all” and climbed onto the Supreme Court roof bearing lit torches. Neither justice has been seen since.

The Founding Fathers certainly wouldn’t be pleased at how politicized the nomination process has become. For the sake of our democracy, let’s hope the Supreme Court stops being a partisan battleground and that Merrick Garland one day emerges from the shadows where he dwells.