Look, There Are Only So Many Female Scientists We Can Profile From Before 1950, So Here Are 7 Housewives That Went To College 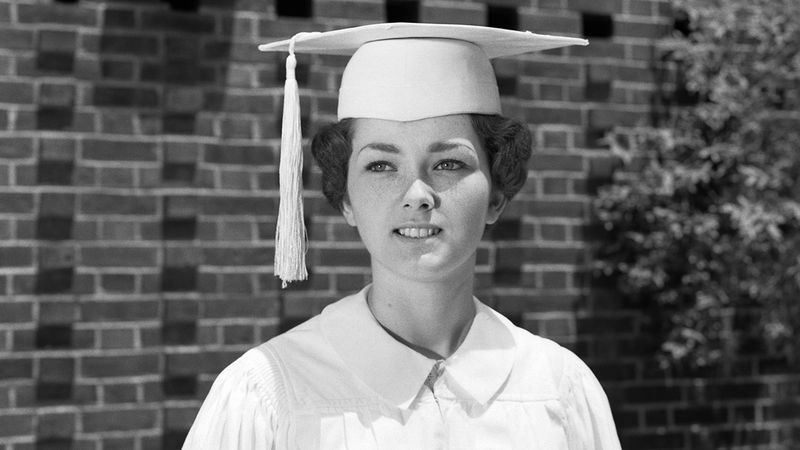 At some point, that well was going to run dry.

Women have always been total badasses, but if you’re looking to be inspired by a female scientist before 1950, there’s unfortunately just an extremely limited pool. Since we’d rather not beat the same drum over and over again, feeding you the same 10 stories till you’re red in the face, here’s Mrs. Marilyn Carlson, a college graduate and housewife who went to Wellesley in 1934. She’s definitely not Marie Curie or anything, but she did earn a degree in English Literature, even after marrying her husband at the age of 19.

Ever heard of Rosalind Franklin, the English chemist who helped discover DNA in 1947, at the bright young age of 26? Well, of course you have, because at this point, her story has managed to wriggle its way into every corner of the internet. That type of thing will only realistically wow you once, maybe twice, so here’s Dottie Wagner, one of Rosalind’s only female classmates, who attended Cambridge with her until taking a leave to raise her three beautiful kids. Believe us: We’d love to profile another scientist in her place, but given how frequently the media’s been wringing every drop out of these ladies, we really don’t have anything else to give.

So, full disclosure, Mrs. Landsburg didn’t actually finish college, but she was one of the women in Vassar’s inaugural class of 1861. Google’s been absolutely going to town on doodles about historic women lately, so honestly, our hands are tied here.

Okay, internet, here’s a friendly PSA: If everyone could just hold off on profiling famous female scientists for a second, and maybe save some for the rest of us, that would be great. We know certain websites have women’s sections, and when you’re in a pinch, sometimes you just need to write up a quick little blurb about someone overcoming obstacles. And that’s fine! But some of us can’t afford to do that over and over again. So here, if you’re looking for some womenspiration, how about Dr. Angela Rosen, who earned her Ph.D. at the young age of 27 from MIT? After a male professor said she could never become a doctor, Rosen was determined to earn the title, but about a year out of school, she was unable to get a job after she mothered his children out of wedlock.

If you’re a girl who loves science, Macy Robinson’s story may not be the most inspiring. But the science field was essentially all dudes pre-1950 and you’ve already read about the handful of important women, so here we go: Macy graduated with a degree in chemistry from Mt. Holyoke in 1932 but was then pressured into moving across the country in order to marry one of her father’s business associates. While Mrs. Harry Robinson may not have become a researcher after graduating, it is at least novel that her name is not already plastered all over the internet.

This is Agathe Finn, one of the first African-American women to attend Spelman College. Unfortunately, due to the political climate of the United States at the time, she was unable to find a job after graduating, and instead chose to become a full-time homemaker. And while it is a shame not to include more women of color on this list, unfortunately 20th Century Fox is releasing a biopic called Hidden Figures, which somehow managed to eat up all the good minority stuff and suck up all its “wow” factor right before our eyes. Rather than just profiling one black, female NASA scientist, they went and profiled an entire lab full of black female NASA scientists, and then knocked them out of rotation and left us with the scraps. And don’t get us wrong, this college-educated woman of color is still inspiring in a lot of ways, but come on, guys. Come on, throw us a bone here.

Yeah, that’s it. Hopefully, everyone’s gotten their fill in terms of inspiring women by now, because at this point, we’ve pretty much burned through all the college-educated housewives, too.