Love Wins! Cap’n Crunch And Maxine Waters Have Reunited And Are Now Pregnant With Twins 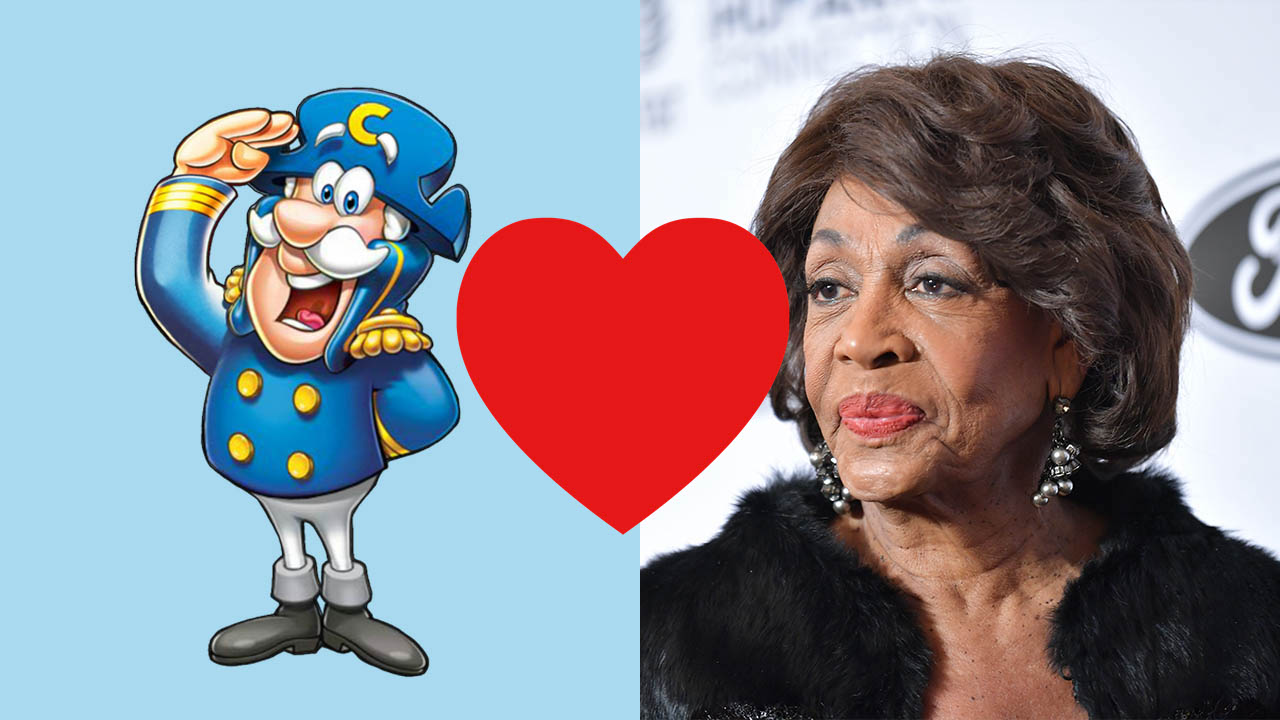 The world was heartbroken in 2019 when news got out that Cap’n Crunch and U.S. congresswoman Maxine Waters had split after 27 years of marriage, but if you’re one of the millions of people who were devastated by the couple’s shocking divorce, prepare to have your faith in love restored: Cap’n Crunch and Maxine Waters have officially reunited and are now pregnant with twins!

In a joint statement released earlier today, Crunch and Rep. Waters confirmed that, after months of reflection, therapy, dentist appointments, and unfulfilling sexual trysts, the pair has rekindled their romance and will soon be starting a family, as each of them is pregnant with one of two twins. Separated in May of 2019, the couple stayed busy during their time apart, with Crunch living out his life-long dream of being a missionary in China and Waters reading her way through nearly all of the Where’s Waldo? books at her local library.

While neither of them had necessarily been hoping to get back together, fate had different plans, as the two ended up falling in love a second time following a chance encounter at David’s Bridal, where they’d each gone to try to return clothes they’d stolen for store credit. After locking eyes near the fitting rooms—Waters in a wedding dress she’d later shoplift and Crunch nude except for a pair of high heels—sparks flew once again, and the pair immediately pounced at each other and engaged in a furious bout of dry-humping that loudly persisted for a good hour before they eventually stopped to go chase after an ambulance they believed was the ice cream truck.

“I divorced Cap’n Crunch after becoming increasingly convinced that he was a Muppet, but during our time apart I began realizing that he isn’t really a Muppet at all but rather a small pharaoh of some kind, and I find that very attractive,” said Waters in the statement, adding that she needs to go to the bathroom. “Once he and I reunited, we became nude and smashed our wacky parts together, and then we did make slime in each other. The slime somehow turned into twin babies that are now growing inside of us, which is very scary. We do not want the babies, but we cannot abort them due to something Cap’n Crunch calls the Cap’n’s Code, which forbids modern medicine of all kinds. He came up with the Cap’n’s Code two days ago while sitting on the toilet.”

As for Crunch, he describes a different reason for reuniting with Waters.

“Maxine Waters has a house, and when I was married to her, she’d let me stay in the house and sleep in one of her dresser drawers,” said Crunch, adding that the house is blue and made of wood and it has a big window that you can look at cars from. “But when we got divorced, I didn’t have anywhere to stay, so I had to go live at the dog pound, and they neutered me there. And while I enjoyed how they let you go to the bathroom outside and how you get to eat your food out of a bowl on the floor, I missed living in a place where I didn’t have to worry about getting my testicles cut off, as that procedure is forbidden under the Cap’n’s Code. So that’s why I decided to get back with Maxine Waters.”

The two then concluded their statement by having a heated argument over which one of them has the longest fingernails, seemingly forgetting that other people would be able to read what they were writing.

Truly, this is a love story for the ages!

While the couple has yet to officially remarry, they say they plan to do so as soon as they scrape together the $4 million they need to buy all the monster trucks they want for their dream wedding. However, whenever they do tie the knot, it’s sure to be like something straight out of a fairy tale, celebrated by billions around the world just like when they first exchanged vows nearly three decades ago. Congrats to America’s favorite couple on getting back together and making us believe once again in the extraordinary power of love.