Lucky To Be Alive: Harrison Ford Had To Be Rescued This Morning After Getting Stuck Inside The Gears Of Big Ben 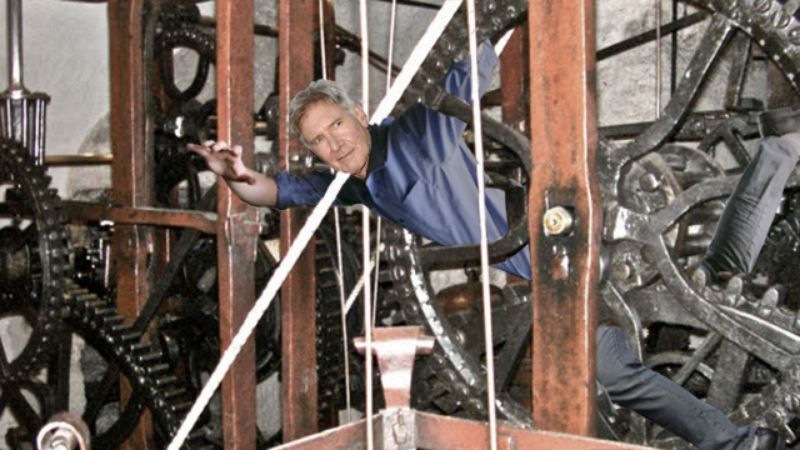 Well, this is scary.

Numerous reports out of London confirm that Harrison Ford had a brush with death earlier today after getting accidentally wedged in the gears of Big Ben.

Officials say that the 72-year-old actor found himself perilously trapped inside Big Ben’s immense oscillating mechanisms and narrowly avoided injury thanks to the efforts of a rescue team who pulled him to safety.

A maintenance worker initially found the Indiana Jones star snarled in the teeth of the clock’s iron escapement shouting, “Help, this damn clock is eating me,” while ducking his head to avoid the trajectory of the massive steel-and-zinc pendulum bob.

“Mr. Ford was discovered jammed between two of the clock’s large mechanical wheels with his body contorted into an S shape that was bending more and more with each and every tick,” confirmed a Westminster spokesman. “Though the gears did stretch him out in a taffy-like fashion, he was found to be in good condition following a medical evaluation.”

According to reports, police initially considered charging Ford with trespassing, but cleared him of any wrongdoing after learning of the events that precipitated the incident. Witnesses say that he was taking a stroll along the River Thames when a construction crane unexpectedly hooked him by the back of his trousers, swung him into the air, and launched the flailing actor through a small gap in the famous timepiece’s gilded dial.

His frightening morning aside, Ford seems to be in good spirits. A recent tweet from his son updated fans on the Star Wars actor’s condition, reassuring them that he was going to be perfectly fine.

Hope you feel better, Harrison! We’re rooting for you.