Major Blunder: ‘60 Minutes’ Slimed A WWII Veteran Mid-Interview In A Disastrous Attempt To Broaden The Show’s Appeal To Children 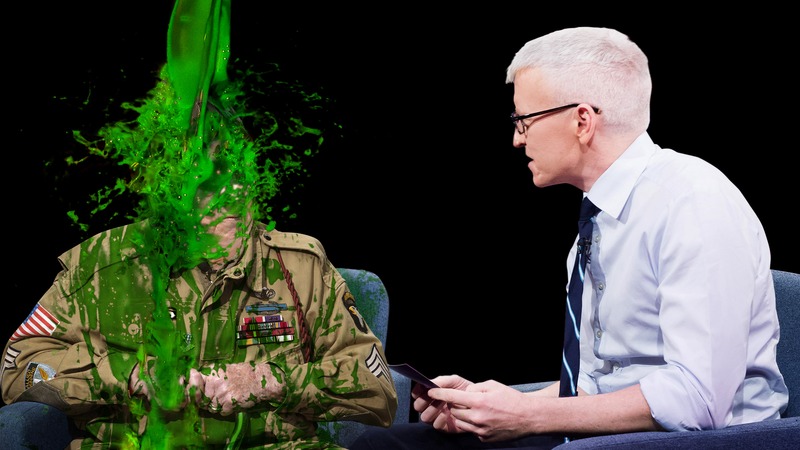 If you tuned in to 60 Minutes last night, you got to see an epic facepalm for the ages. The show’s attempt to appeal to a young audience failed miserably when Anderson Cooper dumped a 55-gallon drum of slime on a World War II vet while interviewing him.

Yikes. What a totally inappropriate and desperate move that certainly did nothing to lower the 58.2-year-old average age of the 60 Minutes viewer.

Anderson Cooper was interviewing 93-year-old marine Harvey Morrison for a piece on post-traumatic stress disorder in war vets when Harvey said the word “Normandy,” prompting Cooper to say, “Uh-oh! You said the Slimagic Word!” and pull a handle that slimed the veteran, Purple Heart medal and all. The stoic vet continued to tell his story while Cooper attempted to goad a response out of him, saying, “Tell the kids at home how it felt to get slimed!” and “Wow, bet the Germans didn’t do that to you when you were interned in a POW camp!” Desperate for a reaction, the noticeably flustered Cooper then pulled the sliming handle again, this time causing only a small amount of slime to drip onto the veteran, prompting him to wheel his wheelchair off set without saying a word.

Woof. What a major embarrassment for a show that had built up so much integrity.

Further adding to the on-air disaster, anchor Lesley Stahl followed the interview up with a promotional piece for a sweepstakes where “one lucky kid gets to take over 60 Minutes for 60 minutes, ask the guests any totally-gross questions you want, spin around in Anderson Cooper’s chair until you throw up, and even pull the slime crank when someone says the Slimagic Word!” The show then ended with an animation of an anthropomorphic 60 Minutes stopwatch with slime running down it playing an electric guitar solo and pulling down its pants to moon the camera.

Horrible. As traditional television loses audiences in droves to streaming services and mobile devices and networks scramble to find ways to reach younger viewers, let’s hope this fiasco serves as a lesson of what not to do so something like this never happens again.