Major Setback: These Harvard Researchers Successfully Cloned A Wooly Mammoth, But The Janitor Ate It After They Went Home For The Night 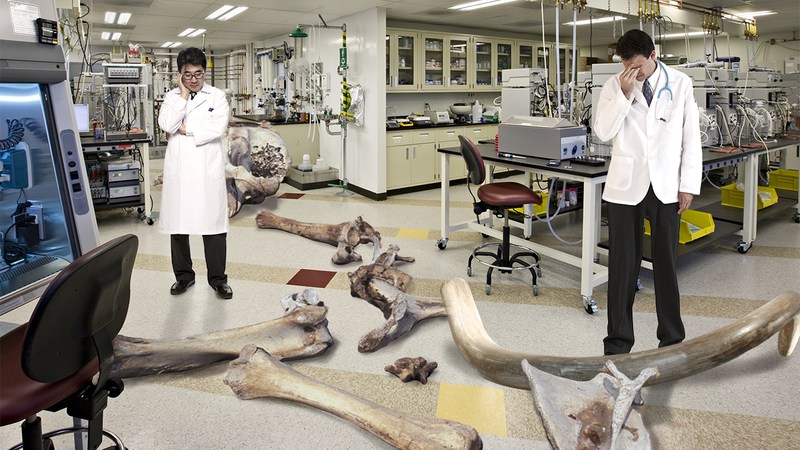 Well, this is definitely a major scientific setback.

Just a few short decades ago, cloning a wooly mammoth would have seemed like a scientific impossibility. But after years of research and groundbreaking advances in the field of genetics, scientists at Harvard finally achieved their goal of reproducing the long-extinct Ice Age mammal. Unfortunately, their success was short-lived, because just a few hours after they left for the night, the janitor came into the lab and ate the whole thing.

The elite team of scientists, who devoted the majority of their careers to the singular cause of bringing this extinct mammal back to life, returned to the lab in the morning to find only a small pile of bones where their pioneering breakthrough had once stood. After reviewing security footage, they discovered that the janitor had eaten the wooly mammoth while making his routine rounds the night before, perhaps under the assumption that it had been up for grabs.

Simply devastating. While no scientific endeavor is without its errors, this unfortunate mistake will set the lab’s progress back by years, if not decades.

“Between the hours of 10 p.m. and 2 a.m., a member of the Harvard maintenance staff entered the secure holding facility where the newly cloned mammoth was stored as part of his normal rounds and consumed the specimen in its entirety,” said head researcher Julie Jacobs. “While his actions are regrettable, we are taking every effort to ensure that no disaster of this magnitude ever again transpires and will be implementing a strict policy of fully labeling any future mammoths with clear ‘Do Not Eat’ signs going forward.”

“He also sucked the marrow out of all the bones, so we’re really back to square one to create a new specimen,” Jacobs added.

While the scientists appear to be keeping a positive outlook surrounding the serious setback, they still have their work cut out for them before there’s any hope of bringing a second mammoth back to life. Among their list includes applying for new grants, recruiting new researchers to their project, and sequencing genomes that will make future mammoths look decidedly less tasty.

Our hearts go out to you, Harvard scientists! While cloning a mammoth has been no walk in the park, we’re definitely looking forward to seeing one of those Ice Age beasts brought back to life at some point.