Major Threat: The Jeans From ‘The Sisterhood Of The Traveling Pants’ Have Been Intercepted By ISIS 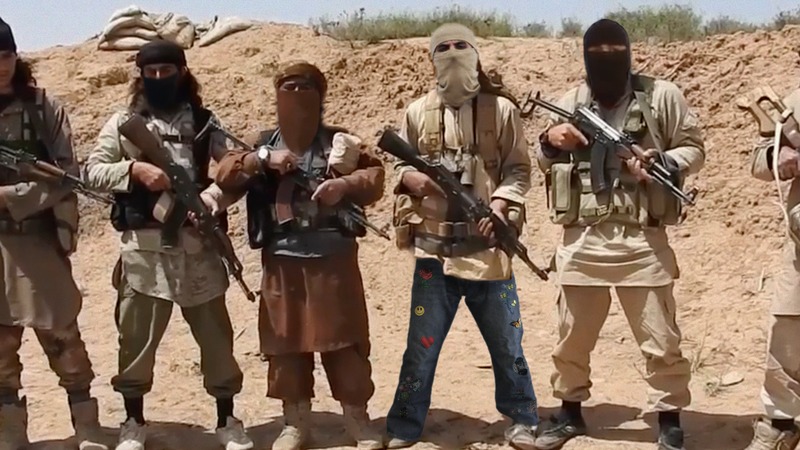 ISIS has proven time and time again that it is willing to commit unspeakable acts of terror in its pursuit of power, which makes its latest acquisition especially bone chilling. Last week, the Islamic State showed exactly why it is a major threat: ISIS has intercepted the jeans from The Sisterhood Of The Traveling Pants.

It doesn’t get any scarier than this. If these magical bell-bottoms are capable of uniting four friends over the course of their summer apart, there’s no telling how dangerous it could be in the hands of this deadly terrorist group.

According to U.S. intelligence officials, the flawless, bedazzled thrift store jeans were intercepted by ISIS militants in Greece while they were being shipped overseas to sisterhood member Lena Kaligaris, so she could have several weeks of unforgettable memories with her boyfriend Kostos. Officials, however, now believe that the traveling pants were smuggled out of the country, and are in ISIS’s custody somewhere in Eastern Syria, where the militant group controls considerable stretches of territory.

Although the intelligence community is still gathering information on the situation, officials do believe that the jeans somehow fit every member of ISIS even though they are all different sizes. Experts suspect that this could be a powerful reminder to ISIS of the bond of friendship they all share with each other no matter how different they may be, which would make the militant group more united—and more powerful—than ever.

In a recent propaganda video, an anonymous representative of ISIS made the following statement regarding the group’s acquisition of the traveling pants:

“The enemies of God continue to attack us from every side, but the traveling pants unite us and make us stronger. No matter how many bombs the Western swine drop down upon us or how far apart we are during the summer, when we wear the pants we know we are part of something greater than all the military powers of the Godless West: a sisterhood.”

Also, since ISIS acquired the pants, militant fighters have not only been using the pants to keep in touch with each other while they are apart, but they have also been following the sisterhood sacred Rules of the Pants. Photos posted on social media from ISIS-affiliated accounts have revealed that militants have been writing down the most exciting places they have been on the pants’ left leg, including Mosul, Aleppo, and most chillingly, the United States.

Absolutely terrifying. With jeans capable of keeping all 7,000 members of ISIS connected over the summer, ISIS could soon become the strongest friend group the world has ever seen. Hopefully it is stopped before it unleashes its next horrific attack on the world.