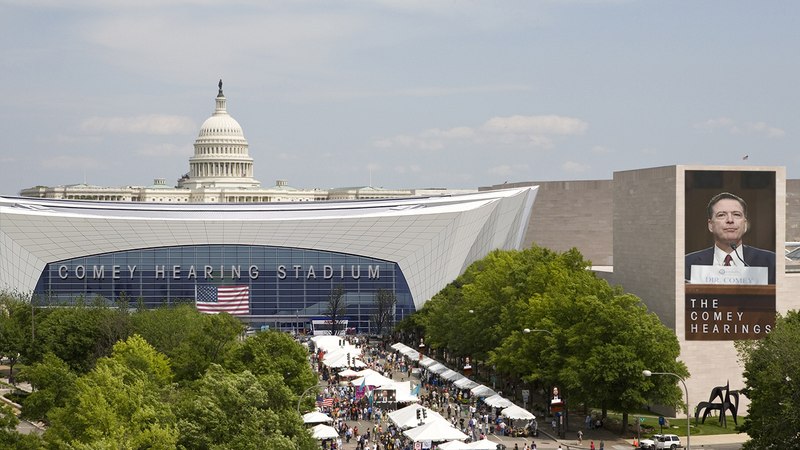 As pundits pore over former FBI director James Comey’s highly anticipated public testimony before the Senate Intelligence Committee today, the event’s financial impact is becoming clear, and the numbers are not looking good. According to recent estimates, the 60,000-seat stadium Washington, D.C. built to host the Comey hearing ended up costing over $1.4 billion.

Since construction began on the 2.1-million-square-foot stadium last month, Comey Hearing Stadium has already far exceeded its original $300 million budget, burning through mountains of taxpayer money as crews worked overtime to clear a site on the National Mall, ship in materials for the multiple tiers of audience seating, and install the $2 million Astroturf floor for Comey to stand on. Yet for all the resources poured into this ambitious project, the stadium stood unfinished and barely functional by the time the former FBI director entered through the tunnel to address the audience of 60,000.

This is utterly shameful.

As Mr. Comey stood with a microphone at the center of the stadium fielding senators’ questions, it was impossible to ignore that the city had sunk more than a billion dollars into an extravagant stadium with practically no future shelf life. Wasteful shortcuts taken during construction left many in bleacher seating unable to hear Comey take his oath or deliver his testimony, while the Jumbotron feeds of the senators flickered throughout his questioning.

What’s more, given the stadium’s poor conditions and acoustics built specifically for Senate hearings, the city of Washington, D.C. is reportedly struggling to book follow-up acts to earn any revenue back, and so far has only booked a Billy Joel concert this July. The surrounding “Testimony Village” that D.C. planners built near the stadium—featuring hundreds of restaurants and 10 levels of underground parking—has also been all but abandoned now that the hearings are over.

Wow. What a waste.

With $1.4 billion already down the tubes and far more to come in maintenance and upkeep costs for the massive undertaking, it’s hard to be proud of any aspect of this debacle. Needless to say, next time there’s a massive hearing in Washington, the taxpayers should get a say in where their money goes, if only to make sure nothing like Comey Hearing Stadium ever happens again.