Mean But True: The Fun Fact On The Side Of This U-Haul Is That There Are No Tens In Pennsylvania 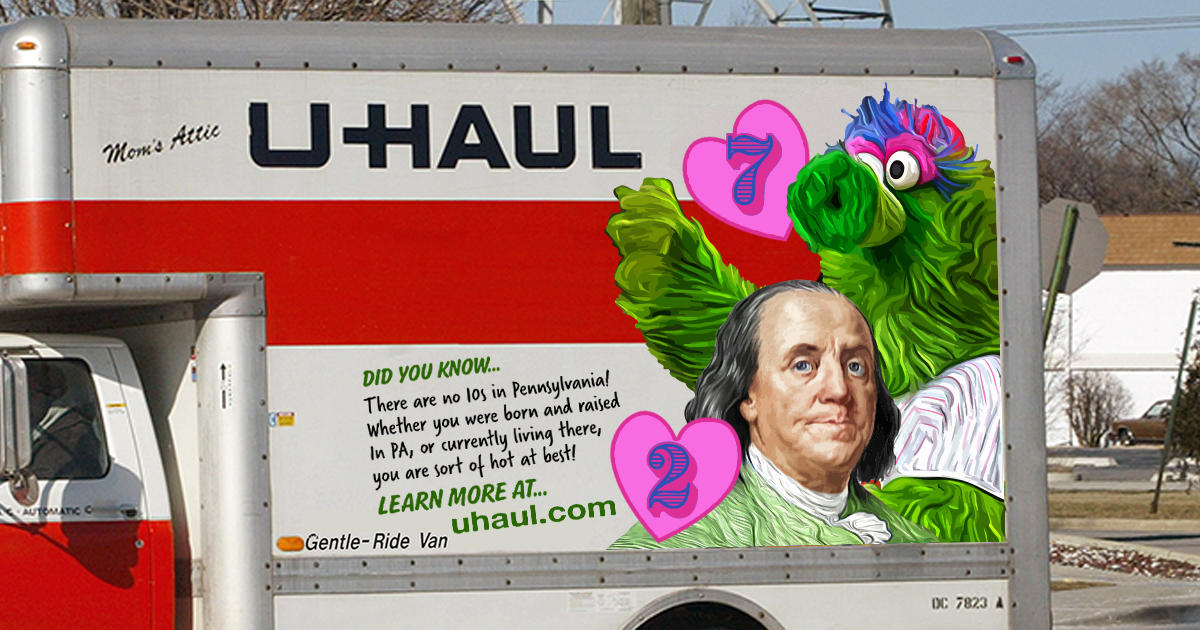 U-Haul has always delighted travelers by including cool trivia facts about states on the side of their trucks, and it turns out the company doesn’t shy away from factoids that are just as harsh as they are interesting: The fun fact on the side of this U-Haul is that there are no tens in Pennsylvania.

Woof. That’s definitely brutal, but they do make a pretty good point.

Painted on the side of this U-Haul currently parked in Wilmington, NC is text that reads, “Did you know… There are no 10s in Pennsylvania! Whether you were born and raised in PA, or currently living there, you are sort of hot at best!” U-Haul’s damning, but ultimately fair claim is further supported by a photo of several famous Pennsylvanians with their corresponding attractiveness ratings: Ben Franklin (2), Taylor Swift (6), Rocky Balboa (4), Allen Iverson (5), Phillie Phanatic (7).

U-Haul didn’t have to do PA like this, but no lies were told.

Additional rationale from U-Haul is provided on a section of their website titled, “Learn More About Ugly Pennsylvanians!” where they state, “From the crackhead, cheesesteak-loving street urchins of Philadelphia, to the puffy Midwesterners who were too stupid to hack it in Cincinnati of Pittsburgh, no one in Pennsylvania’s major cities is all that good looking, and tragically, it only gets worse in the rest of the state. With coal country packed with toothless, white trash 2s and 3s, and Amish country full of dour, sexless 3s and 4s, it’s a wonder that Pennsylvania was ever able to produce Adam McKay, the 8.5 Adonis, at all. While Pennsylvania doesn’t have the ugliest residents of all states – an award that instead goes to the pasty blobs of Minnesota – the fact of the matter is that there’s a level of attractiveness you just can’t reach when you’re wearing an XXL Donovan McNabb jersey, holding a Wawa hoagie in one hand and a Yuengling in the other.”

Damn. Can’t say we ever thought about how PA doesn’t have any 10s before, but this honestly makes a lot of sense. After all, the state’s best known for the Liberty Bell, which is famously ugly as fuck. Sorry, Pennsylvania!