Meet The Most Powerful Man You’ve Never Heard Of 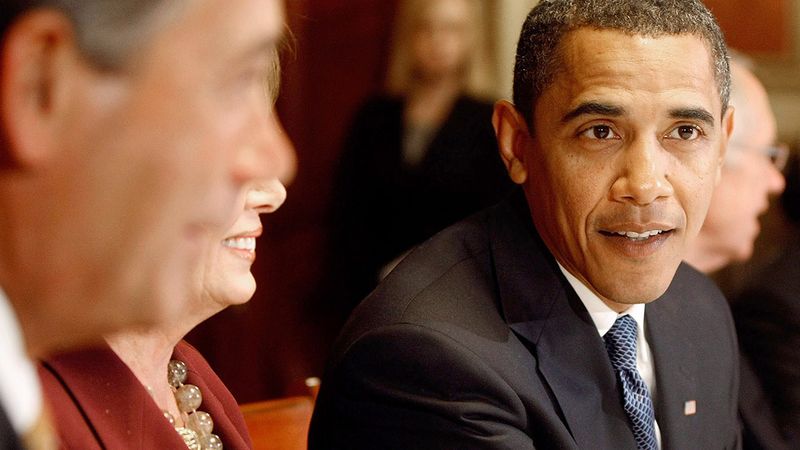 Mention him to most Americans and you’ll likely be met with blank stares. Ignoring the spotlight, he rarely gives interviews. And yet, whether you know it or not, just about every major U.S. government initiative over the last six years bears the fingerprints of one modest man from Chicago.

Meet Barack Obama. In an unassuming gray suit, he doesn’t look like much. But if Mr. Obama (pronounced as it’s spelled) is content not to stand out, it’s because he doesn’t need to. Not with the respect he commands, not with the large network of political connections he commands, and certainly not when nearly every beltway insider agrees: Barack Obama may well be the single most important man in politics.

“He enters a room and something changes. Suddenly, the whole staff looks to him, defers to him,” said Attorney General Eric Holder, who described Obama as “the unseen puppet master” behind the Washington power machine. “Whenever he’s in a cabinet meeting, it’s pretty much an unspoken rule that whatever he says goes. The entire staff trusts him, and even if you don’t, you at least respect him.”

Needless to say, Obama’s connections run deep. And even that may be an understatement. Case in point: Nearly everyone who worked on the 2008 Democratic presidential campaign described Obama as the linchpin of that operation.

“The man’s been a force for years. The Affordable Care Act, the auto bailout, really the entire Stimulus back in 2009—that was all him,” said Senate minority leader Mitch McConnell, characterizing Mr. Obama as D.C.’s modern-day eminence grise. “Basically, if you’re a politician looking to get a bill passed, you know from the start you’re gonna have to go through him. You could have support in both houses of Congress, but if Obama doesn’t like it, it’s as good as dead.”

Despite his considerable reputation behind the scenes as a tenacious political force, Obama remains a private man, preferring to spend most of his days quietly at work from his modest home office on Pennsylvania Avenue.

“The Affordable Care Act, the auto bailout, really the entire Stimulus back in 2009—that was all him.”

But make no mistake: Absolutely no one in Washington questions the supremacy of Barack Obama. Among those alleged to be in his inner circle: U.N. ambassador Samantha Power, Secretary of Defense Chuck Hagel, EPA chief Gina McCarthy, and even Vice President Joe Biden.

“It doesn’t matter who you are or whether you agree with him—Obama is practically top dog around here,” said Secretary of the Interior Sally Jewell, who called the 52-year-old “one of the first people you’d want on your side” in any political battle. “If you know the Joint Chiefs of Staff, you know they hardly take orders from anyone, but I’m telling you: they listen to Obama. Even those guys understand what a mistake it would be to contradict him.”

“Rumor has it he even played a part in the raid that got bin Laden,” Jewell added. “But of course that’s impossible to confirm.”

For a man who enjoys such notoriety, it’s still unclear whether Obama has any further political ambition. For now, at least, it seems Barack Obama remains mysterious, and far from a household name.

Maybe that’s just the way he likes it.