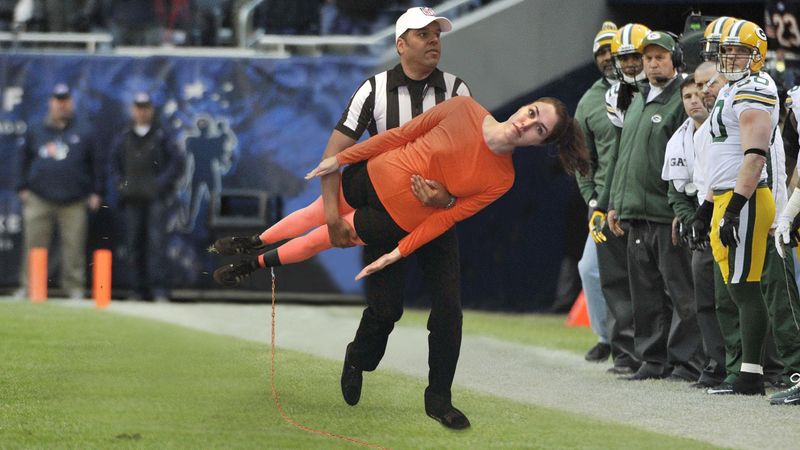 You may not have even noticed it, but Sunday afternoon’s Packers-Bears game was special for a reason that had nothing to do with the 38-17 scoreline or Aaron Rodgers’ four touchdowns. It was also the debut of Rachel Doherty, the first woman in NFL history to serve as a first-down measuring marker.

Rachel was on the field from the opening coin toss to the final whistle at one end of the metal chain, working with the chain gang so adroitly that you’d never have guessed it was her first professional game, much less that she was adding her name to the history books.

Football is big in Norman, OK—and nowhere more so than at Dearborn High School, where thousands of rabid fans pack the bleachers for every Friday night game. But in 2005, when Rachel was a sophomore at Dearborn, it was understood: Girls weren’t supposed to mark the first downs.

“Measuring first downs was always the metal chains’ and plastic rods’ job,” said Mike Arrife, a former student at the school. “Girls were cheerleaders. Everyone accepted that.”

Everyone, it seems, except Rachel. Every single day after practice, the story goes, she would go up to the coach, Harry Spoehr, and beg him for a chance to be a down indicator or measuring chain. After months, Spoehr finally relented, and Rachel got her chance. For the last game of the season, she linked herself up to the chain and headed out onto the field along with the rest of the equipment.

Spoehr recalled that when he saw Rachel on the field, standing perfectly motionless exactly 10 yards from the line of scrimmage, he knew this was what she was born to do.

From there, it seemed like nothing could stop Rachel. She received multiple college offers, eventually attending Oklahoma State on a full scholarship. Surrounded by a host of ultra-talented down indicators, pylons, and goalposts, Rachel thrived, never deviating from the path that has now brought her to the National Football League.

True, she still draws some uncertain glances when people see that a girl is marking the downs, but to anyone who’s ever met Rachel, she’s just another distance-measurement implement.

“If you ask me, that girl’s better than most of the plastic poles working in the NFL today,” said Bears coach Marc Trestman. “Though of course none of them would admit that.”