Misinformation Epidemic: Facebook Users Are Spreading A Dangerous Conspiracy Theory That A Daughter Is God’s Way Of Saying ‘Thought You Could Use A Lifelong Friend’ 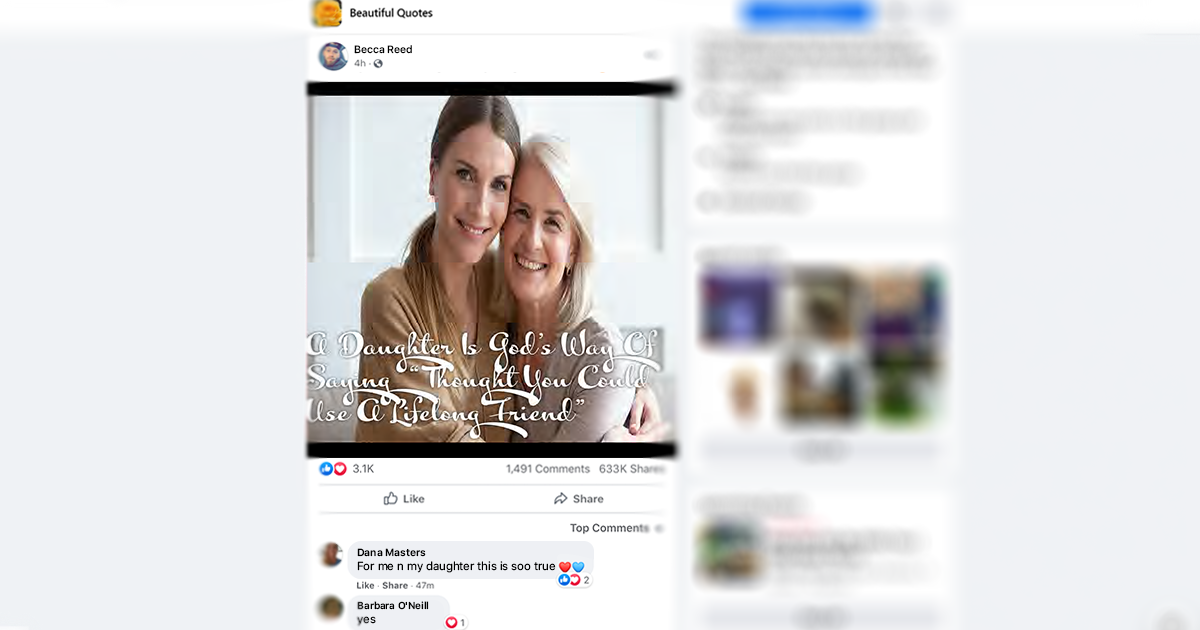 Anyone who lived through the 2020 election can tell you just how harmful misinformation on social media can be, and unfortunately, it appears that it’s now a more serious threat than ever: Millions of Facebook users are spreading a conspiracy theory that a daughter is God’s way of saying “Thought you could use a lifelong friend.”

This is deeply troubling.

According to researchers, this alarming new viral falsehood appears to have originated on a popular Facebook page called Beautiful Quotes, with a meme featuring an image of a mother and daughter shopping together and text explaining that God sends someone a daughter when he knows she needs a partner in crime and a BFF for life. With over 400,000 shares and tens of thousands of comments saying things like “So true!” and “amen love my daughter she is my world,” it is disturbingly clear that the meritless assertion is being widely accepted as fact, and even worse, countless women are tagging their daughters in the post, meaning the lie is reaching a far greater audience than just those who follow Beautiful Quotes.

“The idea that God is providing women with daughters as a means of actively communicating that they need a No. 1 confidant or perfect shopping buddy is totally unfounded, but unfortunately, Facebook has allowed users to amplify this notion to the point where it’s more prevalent than a lot of fact-based content, and that is not a good sign,” said Tracey Yeates, an Amherst College anthropologist specializing in conspiracy theories. “Whether a woman conceives a daughter is entirely determined by the chromosomes provided by the male parent. But sadly, a lack of media literacy has given rise to the alternate explanation, touted by a blurry Facebook meme, that a daughter is born because her mother needs an earth-angel with a smile that can light up the entire world.”

These ideas have no empirical merit, but according to Yeates, they can lead to devastating real-life consequences. Recent studies have shown a 200 percent increase in recent years of middle-aged women on Facebook who identify as “mommy of a princess” and are raising their children to consider themselves “daughter of a queen.” Such notions are popular among older and less media-literate users of social networks like Facebook, where an unattributed post from this morning reading “All problems in life have one simple solution: a hug from your daughter” already has 86,000 shares, along with hundreds of comments agreeing with the blatantly false claim.

At this point, it’s clear that misinformation on social media poses a grave threat to our relationship with the truth, and serious efforts must be taken to get it under control. Whether it’s lawmakers or the social media companies themselves, someone needs to take the reins and regulate these types of posts, because otherwise, we’re going to be living in an entirely post-science, post-fact world very soon.