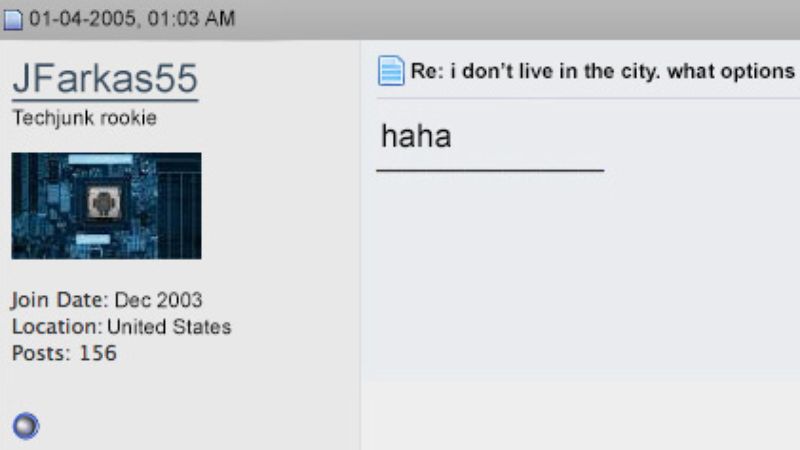 Look at me, and what do you see? A suburban woman you wouldn’t give a second thought. And maybe you’d be right to overlook me now, but there was a time when your assumption would be wrong. For almost nine years, from 2005 to late 2013, I had a second, secret existence, one I never told a soul about. I was an internet comment.

Every day, for eight years, that’s what I was.

You probably never saw me when I was the comment. After all, I was just one string of text, part of one thread on one forum, made by a stranger about a topic I knew nothing about. I never let on that I was leading a double life. I lied to my friends, my coworkers, and everyone I knew or cared about.

In short, I covered it up, all to preserve the illusion that I was just a regular person. But if you were to look up the 16th comment on the thread “i don’t live in the city. what options do i have as far as recycling batteries?” on the techjunk.net forums, you’d find me, right above a comment by the forum administrator, right below a comment featuring a comedic image of a man with his head in his hands.

I lied to my friends, my coworkers, and everyone I knew or cared about.

JFarkas55 was a rookie member of the techjunk.com community when he wrote that comment, the 156th one he’d made on the techjunk forums. I’ve read some of his other comments. Nice guy. Plays along with jokes. I’ve never met him, and having moved on from being his internet comment, I doubt I ever will.

For months and years, I deceived people. And when I think about all the people in the world who live double lives, I want to cry. It’s not because I pity them, exactly—there’s a thrill to living two existences while you continue to project just one—but because I recognize in them something of my younger self. Someone who was hopeful, who believed in reinvention, and who, for eight unforgettable, unrepeatable years, lived as an internet comment on techjunk.net.

In spite of myself, I’ve been back there once or twice. It’s almost all the same stuff, but after the image of the man with his face in his hands, there’s just that administrator’s comment. The intervening comment, the one that used to be me, is gone. What I used to be is gone. I live in the Minneapolis suburbs now. I’m a 37-year-old woman.

The world I knew as an internet comment? It’s a world I know I’m never going back to.