My Infant Son Has A 43% On Rotten Tomatoes. Does Anyone Know How This Happened? 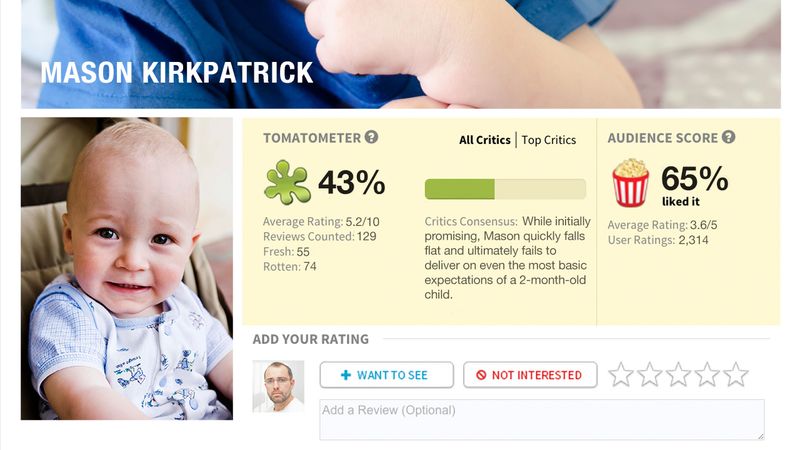 Becoming a father has been a transformative experience that nothing could have prepared me for. When I hold my 2-month-old son, Mason, in my arms, I feel love and joy unlike anything I’ve ever known. That’s why I found it a little confusing when I logged onto Rotten Tomatoes the other day and discovered that Mason had garnered a meager 43 percent rating. Does anyone know why this happened?

Frankly, I’m surprised that Rotten Tomatoes even reviewed my son, since they primarily seem to stick to movies. My wife and I certainly didn’t submit our baby for critical consideration, so we never expected America’s top film reviewers to weigh in on him. On top of that, I’m puzzled that he received a middling grade, which resulted in a green tomato splat being displayed by his name. I know that 43 percent isn’t a completely terrible score, but it does technically classify him as rotten on the Tomatometer.

Peter Travers of Rolling Stone wrote that “a promising baby soon wears out its welcome, rehashing the same tiresome premise with diminishing returns.” A reviewer from Slate said he was “artless and by the numbers” and the Village Voice absolutely slammed my baby, panning him as “less charismatic than the crib he sleeps in.” Do any parents out there know if there’s any way I can get these negative reviews pulled?

…the Village Voice absolutely slammed my baby, panning him as “less charismatic than the crib he sleeps in.”

To be fair, Mason has also received some flattering write-ups. Manohla Dargis hailed him as a “triumph of infancy,” and Screen Rant gave him four stars. Also, his audience score is 65 percent, which is pretty good, all things considered. However, as a father, I’m not sure I want even rave reviews for a child that’s so young. My wife and I have been very privacy-minded when it comes to social media, and we’ve set all the baby pictures we posted to Facebook to be visible to friends only, which makes it even more unsettling to see him reviewed by movie critics across the nation.

Any advice is appreciated. It just disturbs me that when Mason gets older and Googles his own name, the first thing he’ll see is a photo of himself as an infant followed by dozens of film reviewers dissecting every aspect of his first days out of the womb.

Basically, I would really appreciate it if anyone knows whether I should contact Rotten Tomatoes, or whether I should just reach out to the individual publications that reviewed my son. Mason continues to learn and grow every day, and might merit a higher rating at this point. I’ll keep loving Mason no matter what the critics say about him, but I’d feel much more comfortable if he wasn’t on Rotten Tomatoes, or at least had a shiny red tomato certifying him fresh.